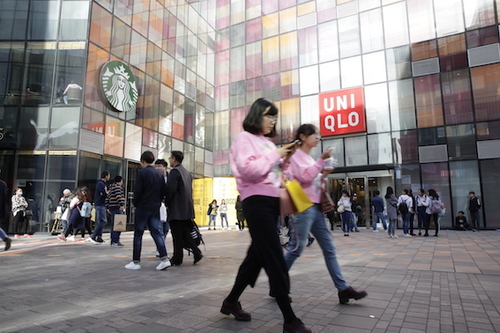 Chanel, Starbucks and Cartier rank as the top three fashion and lifestyle brands among mid- to high-end consumers in China, according to a major new report.

The report, produced by China’s leading fashion business platform Luxe.CO, ranks the top 100 premium brands for mid-high end consumers in China. The rankings are based on a uniquely detailed analysis of data from sales in China, mentions and searches on Chinese social media platforms and search engines, and a survey of mid-high end Chinese consumers.

The study comes as China’s middle-class is rapidly overtaking America’s to become the largest in the world.

The study reveals that American and European brands still dominate fashion in China. The top 10 brands are:

The wide-ranging study also reveals that:

- American and European brands still dominate among Chinese consumers, with 90% of the top 100 brands coming from America or Europe, but newer Chinese entrants make the list too.

- Older brands hold most sway among China’s mid-high end consumers. The average age of the top 100 brands is 76 years. But while European brands mostly hail from the 1930s, most top American brands were founded in the US heyday of the 1950s.

- Some brands have significant potential to grow, with brand awareness far in excess of their current sales ranking in China. Tom Ford, Alexander McQueen and Victoria’s Secret are the brands with the highest growth potential on this basis.

- Chinese consumers are not tied to luxury brands, with the top 100 list including a mix of high-end brands such as Louis Vuitton and Dior, alongside high-street value brands such as IKEA, Uniqlo and Zara.

“With China’s middle-class now the biggest in the world, it’s more important than ever that brands understand what makes China’s consumers tick.

“Our research shows that China’s consumers love the heritage of Europe’s and America’s most famous brands.

But there’s a warning here too - the Chinese brands that make our list are younger on average. The world’s top brands will need to keep upping their game if they’re to hold on to their dominant position.”

- The report rates the performance of 186 international brands in total. Rankings are calculated from a weighting that includes: annual sales attributed to Chinese consumers, searches on Chinese search engine Baidu, follower numbers listed by brands’ Weibo pages (China’s equivalent to Twitter), and results from an online survey with a sample of 964.

- For analysis of the size of China's middle-class see Credit Suisse: Global Wealth Report 2015, which suggests the size of China’s middle-class overtook America’s in late 2015. For analysis of China’s growing fashion industry see Boston Consulting Group: Capturing the Dynamic Growth of China’s Fashion Market, which suggests that growth in China’s fashion market will account for around 30 percent of global fashion market growth in the current five-year period.

- For further information or copies of the report contact Yunhan Fang at yunhan.fang@literaryfinch.com or +44 (0)7808171544. High-resolution photos can be downloaded here.