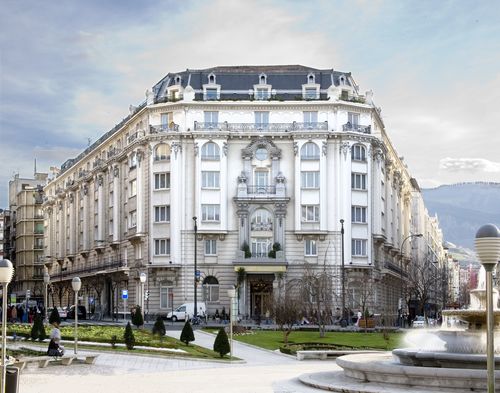 (London, June 2016). Luxury Hotels Group is delighted to announce the latest addition to its growing portfolio.

In the heart of Bilbao, one of Spain’s most exciting cities, Hotel Carlton is a five star hotel with a story to tell. Bilbao is synonymous with the iconic Guggenheim Museum thanks to world-renowned architect Frank Gehry, but the Hotel Carlton was an icon long before this modernist masterpiece. With an imposing beaux arts façade and equally alluring interiors, it’s seen everyone from Albert Einstein to Ava Gardner stay in its rooms and suites since it opened in 1926, and was the base of the Basque government during the Spanish Civil War.

The Basque Country is renowned as one of Europe’s new culinary hotspots, and appropriately enough the hotel’s restaurant reinterprets traditional Basque cuisine with flair, while Bar Americano serves legendary cocktails. With world-class art at the Guggenheim minutes away – and the beautiful Basque coastline a metro ride away, Hotel Carlton is the ideal base for a weekend break from the norm.

Ms. Bernadette Koltai, Luxury Hotels Group’s Vice President, said: “Luxury Hotels Group is all about individuality, and they don’t come much more individual than the Hotel Carlton. It’s the antithesis of formulaic branded hotels typically found in provincial cities and has a genuinely interesting story. We’re delighted to strengthen our presence in Spain by working with such a distinguished hotel.”

Sales Manager of Hotel Carlton, Ms. Silvia Varea, said: “The Carlton Hotel is proud to be partnering with such a dynamic, forward-thinking British company as Luxury Hotels Group and we trust that this is the beginning of a successful business relationship”