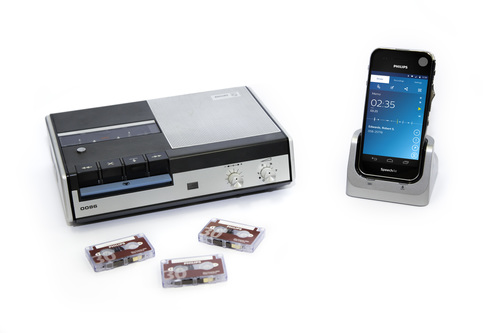 The favourite of the typing pool and the first telephone answering machines, has come a long way – over 3 million miles of tape in over 150 million cassettes produced since 1967.

As the mini-cassette turns 50, it’s hard to describe just what a big impact this tiny object had after its introduction by Philips in 1967.

Over 150 million have been made to date, which if you laid the cassettes end to end would reach from London to Delhi or over 6500Km (4000 miles). The mini-cassettes also contained over 5 million Km (3 million miles) of tape, enough to cover the distance from the earth to the moon 13 times.

Take a letter please Sandra. Dear …..full stop!
Back in pre-personal computer days, the typing pool was a huge area of employment, and any senior manager would have a nominated typist to type letters and documents. Today Philips Speech Processing has replaced typists and the typing pool with a Cloud-based, Artificial Intelligence powered service, SpeechLive, capable of automatically translating speech to text with 99% accuracy, 24 hours a day, 365 days a year.

Around 5 million cassettes a year were produced at the peak, and even today Philips Speech Processing still produces mini-cassettes, but admittedly now on only a single machine at the company’s factory in Vienna – with our own NHS still a customer.

The total production numbers may be huge but it’s still hard to explain to younger generations used to digital products just how much the mini-cassette was once involved in day-to-day life.

The mini cassette was developed from the compact cassette – also a Philips invention – beloved of teens wanting to record the latest Beatles track from the radio. The compact cassette could produce high quality stereo recordings but was originally considered far too large for a portable recording device.

By removing many of the key parts for music recording on the compact cassette, the mini-cassette and its recorder could be made much smaller while quality was still ideal for the spoken voice and recorded passages could be repeatedly played and rewound, rapidly moved backwards and forwards.

These characteristics also made the mini-cassette ideal for the first telephone answering machines - meaning that for the first-time consumers could avoid the frustration of calling an unanswered number while also giving many businesses a new way to hide from angry customers!

Commenting on the impact of the mini-cassette Ryan Braddock, Philips Speech Processing Vice President and Sales Director for UK & Ireland, said: ‘When you see the power and convenience of SpeechLive’s voice-to-text capabilities it’s amazing to think that the simple mini cassette is still being purchased by some of our customers. The fact it still survives must prove how advanced Philips voice technology was and still is in developing exceptional products that withstand the test of time.’

Philips Speech Processing now focuses on sophisticated digital devices and innovative speech-to-text software and cloud-based services, but nostalgic consumers can still purchase both mini-cassettes and cassette recorders from specialist stores and from general merchandisers such as Amazon.


www.philips.com/dictation
About Speech Processing Solutions
Speech Processing Solutions is the global number one in professional dictation. Founded in Austria in 1954 as part of Philips, the company has been the driving force in speech-to-text innovations for over 60 years. Always striving for excellence and putting emphasis on outstanding quality, the company has designed groundbreaking products, such as the new portable Philips SpeechAir, Philips Pocket Memo voice recorder, the Philips SpeechMike Premium dictation microphone and the Philips dictation recorder app for smartphones. The latest software innovation, Philips SpeechLive, makes dictation quicker and more convenient than ever before, by bringing secure dictation workflow to the cloud. With solutions perfectly tailored to individual industry needs, Speech Processing Solutions saves professionals’ time and resources, allowing them to work as efficiently as possible.