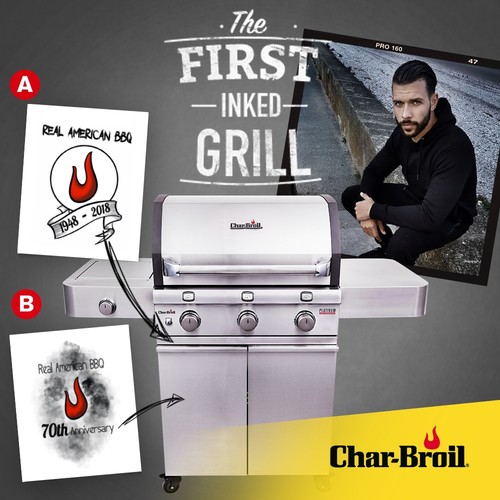 Fans to choose the design to win a £1,800 prize package: a ‘Tattoo BBQ’ and tattoo time at Jay’s studio

3rd May 2018 - To mark the company’s 70th anniversary, America’s #1 gas grill brand Char-Broil® has inked a deal with leading UK tattoo artist Jay Hutton - who has been a star on E4’s Tattoo Fixers TV show for four years.

Jay has been commissioned to design a tattoo that will be engraved onto a Limited Edition top-of-the-range Char-Broil Platinum BBQ, which can be won by two people via competitions running on Char-Broil’s UK Facebook page and on The Everyday Man blog. Winners will also receive time at Jay Hutton’s Adrenaline Tattoo Studio to have a tattoo of their choice.

Jay has designed two exclusive images for the promotion. Fans of Char-Broil and Jay will be able to vote on which design they like the most to get a chance of winning one of these exclusive Platinum BBQs, worth £1,200. The winners will also get up to four hours each at Jay’s Adrenaline Tattoo Studio in Cheshire – one of the leading studios in the UK - to be inked with their own choice of tattoo design* in a session worth £600.

To vote, entrants simply visit Char-Broil’s Facebook page: www.facebook.com/charbroil/ or The Everyday Man blog http://theeverydayman.co.uk/ and nominate the design they prefer. By voting, they are automatically entered into the prize draw. Voting runs from Monday 7th May to Thursday May 31st 2018. One winner will be picked from each of the voting channels. The two winners will be announced on June 1st 2018.
The competition will be supported by social media marketing and promoted via brand partners.

(See Image for the two tattoo designs to vote for)

“Char-Broil is delighted to partner with Jay Hutton,” says Thorsten Schwenecke, Char-Broil’s Brand Marketing Manager, Europe, “Like our products, the tattoo campaign is really innovative. I don’t believe a BBQ company has ever done this before. The unique Platinum BBQs tattooed with Jay’s design is a fantastic way of marking the company’s 70th year.”

Char-Broil brought one of the first charcoal grills to market in 1948. In the years since, it has been delivering innovation continuously – with every new product across its range. TRU-Infrared is one of the most well-known of Char-Broil’s unique technologies, because it has helped revolutionise BBQ cooking by giving up to 50% juicier results.

The Platinum Line from Char-Broil® is a new collection of robust and beautifully designed BBQ grills featuring Char-Broil’s unique TRU-Infrared cooking system that ensures even cooking, no flare-ups and 50% juicier results. The performance is professional-level and the feel is pure quality. Made in solid, premium stainless-steel, the Platinum line features cast aluminium end caps and premium stainless-steel cooking grates and warming racks.

About Jay Hutton: Jay who is 28, began tattooing at age 18 and opened his first studio in 2012. A tattoo he designed of the boxer Mike Tyson caught the eye of the boxer himself, whom he later met for dinner. Unbelievably, the same situation occurred with world champion Floyd Mayweather. Jay became wider known with television audiences through his appearances on the E4 reality series Tattoo Fixers His Adrenaline Studio is in Ellesmere Port, Cheshire.

About Char-Broil®: The Columbus, Georgia based manufacturer of barbecues and grill accessories recently opened their European location in Hamburg, Germany. Char-Broil® is the US market leader in the gas grill segment and also sells outdoor cooking equipment in Canada, Latin America, Australia and now in Europe. In addition to the Char-Broil® brand, the company also makes a range of outdoor cooker brands, such as Oklahoma Joe’s®, New Braunfels Smoker Company® and Thermos®. Char-Broil® is the leader in infrared grilling technology. On entering the European market in 2012 Char-Broil® acquired Dancook, a Danish manufacturer of premium charcoal grills, braziers and accessories. Dancook products are available across Europe and in more than 25 countries worldwide.