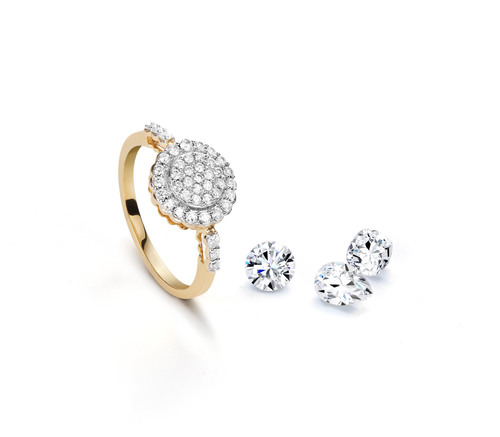 + Research shows Diamond's are the British girl's best friend, with Tanzanite (discovered in 1967) a close second

+ And the nation votes Elizabeth Taylor as the person most associated with sophisticated jewellery whilst Kim Kardashian takes the “Queen of Bling” crown.

The research was conducted amongst 1866 women across the UK, aged between 18-80, and revealed that nearly a quarter (22%) of respondents chose diamond as their top gem, with even more in Wales (three in ten) choosing this as their favourite.

Whilst diamonds are ‘top of the rocks’, the blue Tanzanite gem was voted the second favourite gem (16%) across the whole of the UK but is the Number 1 gem for women in the South and South-West of England.

Despite Tanzanite being a fairly "new" gemstone, discovered in 1967, the blue gem has quickly become popular with modern stars and celebrities including Penelope Cruz, Cate Blanchett, Beyonce, Anne Hathaway and the Duchess of Cambridge.

Other highlights of the research include:

+ Londoners prefer Emerald and Amethyst as their second and third choice respectively.

+ Asked about their motivation for choosing their favourite gem, four in ten women responded because ‘they love the colour’, a further 14% stated because it looks classic, with women in the Midlands and Wales placing slightly more importance on the classic attributes (18%).

+ Women in London placed equal importance on jewellery looking classic and making them looking glamorous compared to other women across the country.

+ When asked which well-known person across the world they most associated with sophisticated jewellery, most popular (a fifth of respondents alone) voted for the late Elizabeth Taylor (NB – respondents were not given a multiple choice of names – an open response was required). The Duchess of Cambridge polled second and the Queen came a close third. Other women also highlighted as icons of jewellery sophistication were Audrey Hepburn, Sophia Loren, Jackie 0, Princess Diana and Victoria Beckham

+ In contrast when women were asked which celebrity is best associated with ‘bling’ Kim Kardashian was voted no 1– with Rihanna and Liz Taylor (despite the sophistication) also frequently named.

+ When asked which celebrity comes to mind with diamonds, Liz Taylor once again emerged as the name most associated with the gem, followed by Marilyn Munroe and Shirley Bassey

+ The research suggests that when it comes to self-gifting, shoppers are much more generous with themselves than with a family member or spouse – spending 47% more on self-gifted jewellery

+ Half of respondents said they are prepared to spend up to £150 if they are buying jewellery for themselves, with a further quarter saying between £150-300 and more than a tenth saying £300-500.


About GEMPORIA:
Gemporia is a leading British TV and online jewellery retailer, with turnover of £67.2m*, dedicated to making genuine gemstones available to all. The precious limited-edition gemstone jewellery, priced from £29 to £15,000, is sold online at Gemporia.com; on TV via its dedicated jewellery channel Gems TV; and via the Gemporia App. Gems TV is hosted by a team of gemstone experts, selling exclusive pieces in a reverse auction format, where the price of the piece continues to fall throughout the auction, and all buyers pay the final low price. Gemporia’s highly skilled gem hunters travel the world to find the finest ethically-mined precious gemstones, sourced directly from the mines whenever possible. Ethics and people are an integral part of everything Gemporia does, and in 2012 Gemporia set up the Colourful Life Foundation, an independent charity focused on improving health and education facilities for the adults and children who live in the areas it works.
Based in Redditch, Worcestershire, Gemporia was founded 2004 by Steve Bennett and his family. Gemporia is now an employee-owned business, with 75% of the business owned by trusts for the benefit of its 300 employees, with the remaining 25% owned by its founders. *year end March 2017
www.gemporia.com ; Gems TV is live 24 /7 on Sky channel 655, Freeview channel 43, Virgin Media channel 755 and Freesat channel 805