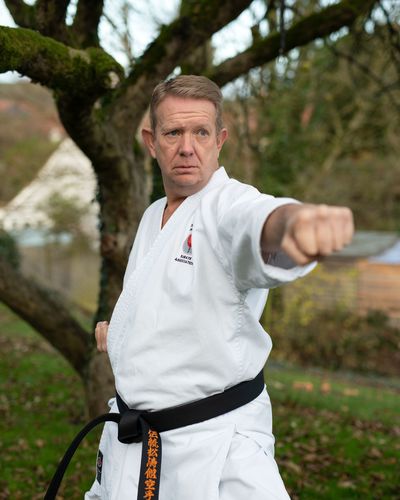 Manning was bullied heavily and he took up Karate

He continued to become head of the Traditional Shotokan Karate Association which he has been running for many years; Shotokan clubs from many areas of the UK including Jersey are overseen by Manning who conducts regular courses, training camps and gradings for his members (when the current pandemic allows of course).

Now married with two children, Manning spends much of his time teaching youngsters how to protect themselves from bullies. His training has also helped him manage his grief at the loss of first his mother and then very recently his father.

He said, ‘sadly bullying is an issue which rears its head too frequently these days. I try to install confidence and power into my students so that if they are put into such a position, they can handle the physical and mental issues surrounding the experience. They know I will step in to help them where it is needed’.

Manning is a Senior Examiner and has previously been Deputy Chair to the National Management Committee and Chair to the National Technical Committee within the Governing Body. He regularly works with the Chair of NAKMAS, Joe Ellis, who has taught on courses hosted by him in Tisbury, Gillingham and Mere as well as Kent (where NAKMAS has its Head Office and Honbu (training centre)).

Ellis was also bullied. He said, ‘at school I was heavily bullied, and my parents decided I should learn karate. The combination of this training, and joining the army, helped me to overcome my shyness and taught me to stand up for myself. I am thrilled that Peter has reached this level. He is extremely knowledgeable and technical, and he deserves this grade unreservedly. He has spent so much time working with his community and we are very proud of him and his work’.

NAKMAS is a core member of the Anti-Bullying Alliance (ABA) and takes part in campaigns run by them. The ABA defines bullying as ‘the repetitive, intentional hurting of one person or group by another person or group, where the relationship involves an imbalance of power. It can happen face to face or online’.

The National Association of Karate and Martial Art Schools (NAKMAS) National Governing Body is a non-funded national governing body and is a member of Sport & Recreation Alliance (formerly known as the CCPR). With its Head Office based in Kent, NAKMAS governs all forms of traditional and modern martial arts and has over 60,000 members.

NAKMAS holds a National and International Quality Standard Certificate, BS EN ISO 9001:2015, via the BSI (British Standards Institution) and is accredited to the Equality Standard: A Framework for Sport.