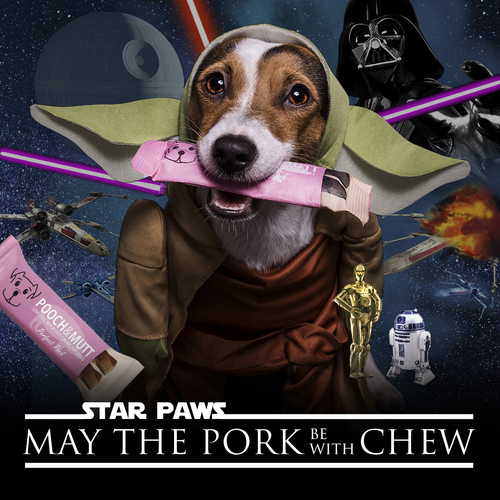 Following on from the international premiere of the most recent Star Wars film, The Last Jedi, the healthy dog food and treat brand Pooch & Mutt has launched its latest campaign in homage to the blockbuster series.

The Star Paws campaign features cute pooches dressed as famous Star Wars characters, mocked up into their own movie-poster style images. This includes a doggy-Dart Vader - "Welcome to the Duck side" and a yappy-Yoda - "May the Pork be with you".

Pooch & Mutt has a bit of history of this type of campaign. Last year they released a behind the scenes 'mockumentary' showing how Buster the Boxer may (or may not) have behaved backstage on the filming of John Lewis' famous trampoline ad. This campaign had over 1m views on www.facebook.com/poochandmutt - where it can still be seen and was PR week's top John Lewis parody ad.

Pooch & Mutt founder, Guy Blaskey, commented, "At Pooch & Mutt we identify strongly with the Star Wars Rebels. Like them, we face a dominant enemy in the guise of Mars (Pedigree, Royal Canin, James Wellbeloved) and Nestle (Bakers, Bonio, ProPlan), who control 87% of the £34m spent annually on dog food advertising in the UK. However, just like the rebels we are achieving more with less and using the limited resources available to us to fight for the good of the majority."

Pooch & Mutt also confirmed that although they are only currently producing health food and treats for dogs, they would look at the ideas for Wookie and Ewok foods should the opportunity arise.

Notes to the editor:

High res imagery can be downloaded from http://bit.ly/2AS6VU6

On a mission to help dogs lead Happy Healthy Lives by making the best Grain-Free foods, treats and supplements a dog can get.