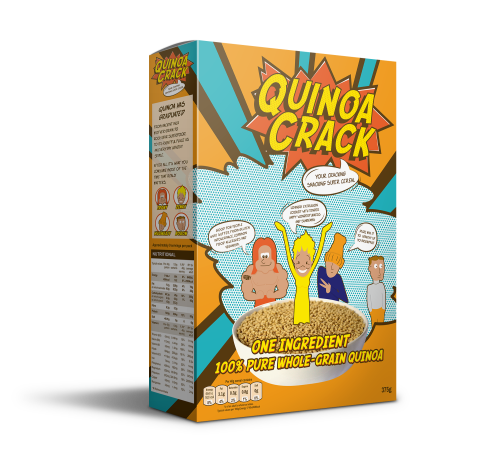 According to founder Jason Abbott: “This cereal exists because you and I are tired of big corporations feeding us sugar for breakfast. We’re European quinoa growers and cereal activists and whilst we like sugar, we get angry when it’s marketed as nutrition.”

“Fed up with the usual cereal offerings and fed up with the lack of simple options for people with food intolerances, we decided to give it a go ourselves - and have some fun with it as well,” continues Abbott.

“More and more consumers feel they are being mislead when it comes to the nutritional value of packaged goods - and nowhere more so than in the cereal aisle - we felt it was time for a more honest approach.”

Quinoa Crack is made from 100% whole living grains of European grown quinoa which go straight into the extrusion cooker and then into the cereal box. No additives, no sugar, no nutritional rubbish has been added. The resulting cereal is crunchy, easy to mix and blend and according to Abbott; “we’ve made a simple, healthy cereal with a good flavour and texture. You take it from there.”

Quinoa Crack is already being used by nutritionist Amanda Hamilton for her health retreats who has become an ambassador for the brand.

Says Hamilton, “what attracted me to working with Jason was his passion for a simple, nutritious cereal without any of the usual junk that is added to cereals. That, plus the provocative name and bold packaging approach also caught my attention - I actually laughed out loud when I saw it, it is just so upfront and in-your-face honest.”

“Quinoa is a wonderful source of protein, fibre, minerals and vitamins and has the added advantage of being a great alternative to gluten for those with intolerances. It’s also a great mixer - we mix it with Greek yoghurt and stewed fruits and it is simply delicious” says Hamilton.

The cereal is being distributed direct to consumer and sold in “8-packs”. Abbott explains: “We want to avoid the big, impersonal food distribution and retail chains. Instead, by selling on the web, me (a quinoa grower and cereal producer) and you (a person who will eat the quinoa cereal I've produced) are in direct contact!”

“If you don't have any friends and want to buy just one box at a time, ask your favourite local independent grocers to stock Quinoa Crack; suggest they buy it on this website by the 8-pack. We like little shops.”

Free press sample box of the cereal available on request.