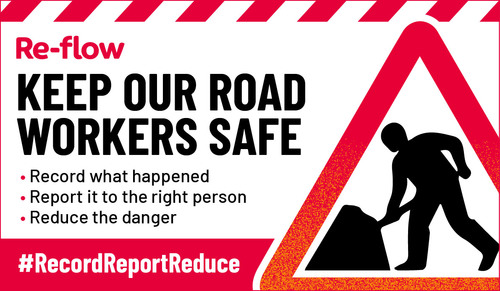 A January 2020 survey conducted for Re-flow by YouGov found that only 17% of the public said they didn’t think that enough is being done to keep roadworkers safe. This is in stark contrast to the rising number of incidents being reported by those working in the highways sector.

Do you think enough is being done to keep road workers safe? Tell us in our ’10 second survey’
https://www.re-flow.co.uk/roadworkersafety

Get the video promoting the survey- https://youtu.be/NQkjIiGDc_o

While awareness is rising, many of these incidents are being reported too late for any reasonable action to be taken to improve the safety and working environment for highways operatives, leaving them exposed.

Re-flow software, which is primarily a mobile workforce job management system comes with a feature that enables the immediate recording and reporting of such incidents. This has aided existing users to give a highly accurate accounts, resulting in quick action being taken and being able to prove or rebuff insurance claims.

Mark Salmon, the Financial Director of Toppesfield, the UK’s largest independent surfacing contractor and an existing user of Re-flow said:
“Re-flow has had a big impact across the whole business already. We target our staff on reporting near hits, which means that we can learn from any potential risks that are onsite and mitigate them at the earliest possible opportunity. Since Re-flow has been implemented, our recording of near hits have been at their highest level, which is great because it means that we can react to the risks out there.”

#RecordReportReduce to turn the corner on Road Worker Safety

The #RecordReportReduce mantra highlights three important steps for mobile workers to take for immediate action when their health and safety is compromised in any way:
1. Record what happened while the details are fresh and action can be taken.
2. Report it to the right person in your company, so they can follow it up or make changes to keep you safer.
3. Reduce the chance of being in danger or in line for abuse if people can help.

Many industry bodies, are implementing support networks for their members to raise awareness of the abuse road workers are facing. In 2016, just 10 members of the Highways Term Maintenance Association reported 347 incidents of road worker abuse, most shockingly assaults including shooting with guns and air rifles; throwing of items such as screwdrivers or fridges at workers; and kicking, punching or beating male and female operatives – in one case with baseball bats.

Public education campaigns such as Safety Hub’s Respect Our Roadworkers and Scotland Transerve’s #RoadWorkerAbuse initiatives are an important part of the picture. Re-flow is approaching this problem from another perspective, which aims to give road workers the tools to take action if they are exposed to dangerous driving, abuse or other issues that compromise their safety.

Mike Saunders, Managing Director of Re-flow said “Hearing first-hand the treatment people working in the highways industry face, we need to do more to help road workers take a stand. We hope to support the coalition of awareness raising organisations by providing a fast and simple means of reporting incidents as the happen, within the Re-flow mobile workforce management system.”

All figures, unless otherwise stated, are from YouGov Plc. Total sample size was 2092 adults. Fieldwork was undertaken between 6th - 7th January 2020. The survey was carried out online. The figures have been weighted and are representative of all UK adults (aged 18+).

With Re-flow field management software, you can centrally control your jobs on location and achieve outstanding workflow management.
Our desktop dashboard gives you powerful job command functionality, and in the field, our ultra-stable app won’t let you down.
As your workers complete tasks and information, data comes back to the dashboard, instantly highlighting what’s been accomplished.