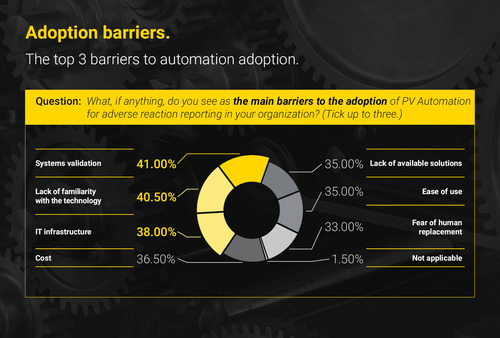 Although almost half of the 200 respondents have implemented some form of PV automation, a lack of technology awareness and poor appreciation of the rapid ROI are inhibiting transformation of adverse event case capture

World Drug Safety Congress Americas– September 1st, 2020 - Arriello, a provider of regulatory affairs & pharmacovigilance solutions and services for life sciences, has revealed a striking mismatch between pharmaceutical companies’ aspirations and their actual plans for automating adverse event (AE) reporting, in a substantial new survey conducted on both sides of the Atlantic.

The online Censuswide survey was carried out for Arriello in late June 2020 with 200 respondents at manager level and above in pharmacovigilance (PV), drug safety and product safety departments of life sciences companies in the UK and the US. It found that while the majority of organisations professed to have implemented some form of PV automation, or plan to do so over the next 12 months, most lack sufficient IT insight and capability to automate AE case intake.

While 48 per cent of all respondents (rising to 61 per cent working for large pharma organisations), claimed they already had some form of standalone PV automation solution in place, and a further 42 per cent of all companies expressed plans to implement something over the coming year, follow-up questioning suggested that these capabilities were likely to be fairly basic – and unconnected to AE data capture. The fact that a similar proportion of companies professed to have implemented PV automation as part of a wider solution offered a first clue to this.

Of those already on the path to automation, just a fifth (20 per cent) of companies said they had capabilities specifically for AE case intake, mostly at large pharmaceutical companies. This figure was substantially lower that the proportion of respondents claiming to have automated adjacent activities - such as medical information and clinical documentation management; standard form and report compilation; product quality compliance information and regulatory intelligence management; and literature screening (all of which were already in place at half of companies on average – on a sliding scale of 64 down to 44 per cent across this list of use cases).

While most respondents said they are planning an automated solution for AE case intake within the next 12 months, the survey went on to reveal a number of practical barriers that were likely to inhibit progress – the top 3 being IT-related challenges. Respondents revealed that an inability to validate new systems (cited by 41 per cent), a lack of familiarity with AE case intake technology options (by 41 per cent), and inadequate IT infrastructure (cited by 38 per cent) stood in the way of automating these vast and largely manual workloads – more so than concerns about cost, or fear of human jobs being replaced.

More telling, though, was the finding that the vast majority of respondents did not feel that a lack of AE case intake automation put them at a disadvantage. This suggests that IT solution providers have failed to communicate the huge potential efficiency savings, as well as the scope for improved data quality and accelerated reporting, that come with the ability to capture case data in an automated way.

“Data like this inevitably warrants further investigation,” commented Dr John Price, a life sciences regulatory and safety consultant and advisor to Arriello. “On the face of it, it looks as though pharmaceutical companies don’t want to miss out on the promise of AE case intake automation. Yet many may not appreciate how quickly they could transform their PV operations and redeploy expensive professionals’ time - with a potentially huge ROI - if they automated manual AE case intake.

“This can be achieved by enabling frontline people – including healthcare professionals and company personnel – to capture information directly into reporting systems,” he noted. “Technical solutions are already available to do this.”

The full findings can be found in a report that is free to download from the Arriello web site. They will also be discussed in detail in our upcoming webinars.

About Arriello
Arriello has been a leading provider of risk management and compliance services to the Life Sciences sector since 2008. These include Market Consultancy, Global Regulatory Affairs strategy and implementation, Full and Local Pharmacovigilance solutions, Clinical Drug Safety, and Quality and Compliance auditing and systems.

Our brief is simple; to make the process from development to market faster, better and smarter. Headquartered in Ireland, with European operations in Central Europe, we provide expert Market Access guidance across the EU, US, LATAM, CIS, MENA, Asia and South Africa. With our extensive global vendor network, ISO 9001 certification, years of experience and satisfied clients, including Global Originators, Biotechs, Generics and CROs, you can be confident in our ability to deliver. However complex or simple your requirements, you can rely on us as a trusted partner. More at www.arriello.com and @Arriello

Sarum is a Digital PR and Brand Journalism agency specialising in delivering strategic Marketing and PR services to a number of UK, USA and European based clients. Sarum is headed by Carina Birt who founded the company nearly 19 years ago