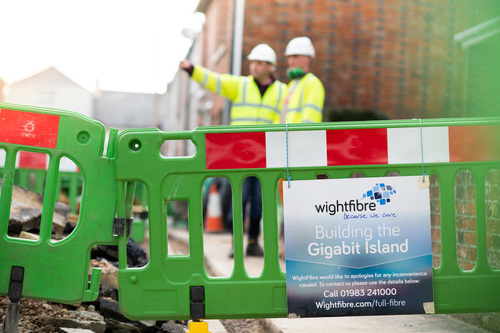 WightFibre passes 20,000 homes milestone in roll out of full-fibre broadband on the Isle of Wight

Now available for service to over 15,000 homes and businesses on the island

Cowes, Isle of Wight, 16 March 2020: WightFibre’s Gigabit Island project continues at pace with a total of 15,000 homes now able to receive the service.

Homes throughout Ryde, Sandown, Wootton, Cowes, Gurnard, Northwood, East Cowes, Newport and surrounding areas including Carisbrooke, can now enjoy WightFibre’s new full-fibre broadband. This new ultrafast, future-proof full-fibre broadband truly is a different kind of broadband and provides a completely new online experience at speeds of up to 900Mb. This speed is amongst the fastest broadband speeds available anywhere in the world.

Commenting on the latest release, WightFibre CEO John Irvine said “This is a significant milestone in our project and demonstrates the project is well underway and on track to deliver full-fibre broadband across the whole island. Parts of Ryde and Sandown are included in the 15 000 homes passed and work is already underway to connect parts of Shanklin in the next couple of months as well.

“WightFibre’s point to point full-fibre network (where every home gets its own dedicated fibre optic cable rather than sharing with others) is fairly unique in the UK and will set the island apart from others allowing WightFibre to deliver an amazing customer experience”.

One of the first customers to receive WightFibre’s new service, Matthew Carter, says “The service has been absolutely great, no slowdowns at peak times and no waiting for things to buffer. WightFibre’s customer services team have been brilliant whenever I’ve needed them too.”

Bob Seely MP said: “This is good news for the Island and a fantastic start to WightFibre’s Gigabit Island project. We need to start levelling up the Island and the Government’s full-fibre broadband programme will help deliver this ultrafast broadband to all Island properties over the next few years. This project is providing the Island with some of the best broadband available anywhere in the world.”

Picture of an actual install

A description of the benefits of full-fibre broadband versus copper based broadband together with supporting graphics can be found here. www.wightfibre.com/full-fibre

Since 2001, WightFibre has owned and operated its’ own telecommunications infrastructure entirely independently of BT. WightFibre provides phone, TV and broadband services to homes and businesses on the Isle of Wight.

The WightFibre Gigabit Island Project will see full-fibre deployed to around 65,000 homes and businesses across the Island by 2022. The scale of this significant civil engineering project is reflected in figures that show how 500 Kilometres of trenches will be dug, containing 5 million meters of duct and 750 million meters of fibre-optic cable as this full-fibre, future proof broadband network continues to roll out across the island, including areas not previously served by WightFibre.