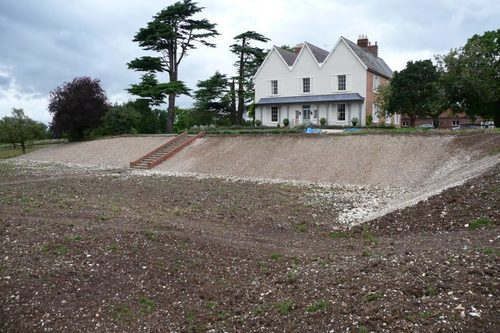 A Hampshire wildflower meadow, grown and supplied by Wildflower Turf Ltd in 2008, has recently reached the ripe old age of ten.

A decade after it was installed at Grade II listed Ashley Manor in the Test Valley, the wildflower meadow continues to thrive and provide a safe haven for an abundance of wildlife. Improving long-term biodiversity and ensuring a species-rich habitat is now an important goal for landscape designers, and Ashley Manor is testament that a well-maintained wildflower meadow offers great longevity and can be relied upon to provide colour and interest year after year.

At the commencement of the original landscaping endeavour in September 2008, Wildflower Turf, a soil-less, pre-grown wildflower mat, was installed across two tiers of the steep south and west facing banks to the rear of Ashley Manor.

The turf rooted in quickly and established itself well over the winter months, flowering beautifully in the spring and summer of 2009. The perennial Red Campion variety did particularly well on the lower slopes and the turf also acted very successfully as a weed suppressing mat.

The wildflower meadow at Ashley Manor also formed a home for a number of mammals and invertebrates, with voles and slow worms quickly taking up residence.

As well as the obvious aesthetic and wildlife benefits, ten years of meadow management has also given Ashley Manor’s Head Gardener, Olly Samways, ample opportunity to trial and perfect his meadow cutting regime.

Initially, a two-cut approach was used, with the first cut usually undertaken in late June. This regime greatly assisted with the initial establishment of the late-season varieties in the turf, as well as allowing for the removal of old growth that would have otherwise started to compost and raise nutrient levels by the autumn. In recent years Olly has swapped to a single-cut regime, with the meadow beneficially requiring less maintenance as it has matured.

Managing Director of Wildflower Turf Ltd, James Hewetson-Brown said, “We already knew from the 15-year-old Wildflower Turf meadow at our production site that, if properly established, wildflowers offer a long-term solution requiring little maintenance. Olly’s positive feedback over all these years has expanded our knowledge and confidence in our products and we are grateful for his interest and passion.”

Ashley Manor Head Gardener, Olly Samways concurs, “Our experience with our Wildflower Turf over the last decade has been excellent and I have no reservations at all about waxing lyrical about it to anyone who asks about it.” Olly continued, “Whenever I give tours around the garden, the wildflower areas continue to draw the most interest, as they have done every year since the turf was installed.”

About Wildflower Turf
Wildflower Turf is recognised as the leading organisation in the UK for those seeking knowledge or products to develop wildflower spaces.

Founded in 2003, Wildflower Turf Ltd pioneered a soil-less growing system which has transformed the reliability of establishing wildflower meadows. The company has a range of Wildflower Turf products to create and enhance a low maintenance, biodiverse and beautiful meadow.

Wildflower Turf is recognised as the leading organisation in the UK for those seeking knowledge or products to develop wild flower spaces.