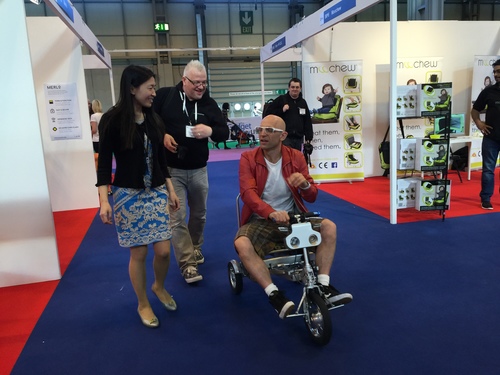 Because it can be easily folded up, used as a seat or put into scooter mode, eFOLDi is extremely versatile

Sumi Wang, a finalist of the British Inventor’s Project, launched a Kickstarter campaign today at The Gadget Show Live with the help of the show’s presenter, Jason Bradbury.

The campaign will raise investment for the creation of an electric scooter, called eFOLDi, that can be folded into a piece of luggage.

Jianmin Wang worked as Chief Engineer for China’s National Acrobatic Troupe for over 20 years, where he was responsible for devising the mechanisms behind many of the incredible stunts that have won the troupe international acclaim. His designs for performance and stage props have won numerous international circus competitions and awards.
In 2012, Jianmin Wang broke his leg and was unable to get around. This paved the way for the creation of eFOLDi, as Managing Director Sumi Wang explains:

“We’re extremely proud of eFOLDi and are thrilled that Gadget Show Live have chosen us to take part in the British Inventors’ Project.”

Because it can be easily folded up, used as a seat or put into scooter mode, eFOLDi is extremely versatile and appeals to a wide range of consumers: commuters, those with limited mobility, festival goers and outdoor enthusiasts.


About eFOLDi:
eFOLDi was created by Chinese inventor and engineer Jianmin Wang and his daughter Sumi Wang in 2012, after he broke his leg and was unable to get around.
Sumi Wang, a British-Chinese engineer, saw the potential of eFOLDi and founded the company SunTech UK, which will bring eFOLDi to market.
Sumi has a background in engineering and business, and worked for leading names such as Cosco Shipping Co., Novo Nordisk, Black & Veatch and Queen Mary University of London before founding SunTech.