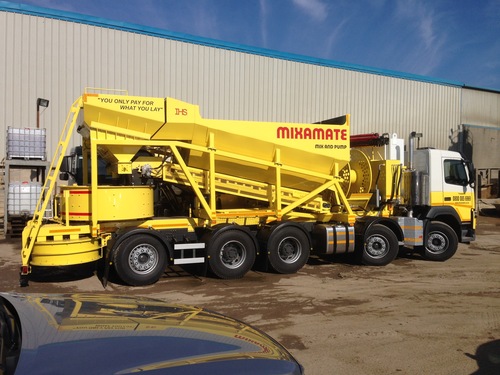 Mixamate – a leading UK provider of mix on site concrete and screed – today announced the launch of its all-in-one liquid screeding service, allowing for the delivery, mixing, and pumping of screed from a single vehicle.

Pioneering industry technology
The new machine removes the need for companies to hire a separate screed pump, reducing hassle and labour costs and greatly advancing traditional on-site screed pumping practices. The all-in-one truck simply drives to the required site, mixes the materials within the vehicle, and pumps the liquid screed directly into the required space via an 80 metre on-board pumping hose.

With an increasing demand for liquid screed in both residential and commercial builds, Mixamate says it became essential to add this option to the company’s growing list of services:

“Liquid screed is something we have been asked for increasingly this year,” said Chris Smith, Managing Director for Mixamate and Chairman of the Batched on Site Association. “It comes with certain advantages over sand and cement screed, particularly with the growing popularity of underfloor heating. If people want the option for liquid screed we can deliver any amount from as little as 2m3. Both this new product and our traditional screed mixes can be administered through our all-in-one pumping machines. This dramatically reduces the hassle associated with this type of work.”

ASUC membership
The company has become an associate member of the ASUC, the Association of Specialist Underpinning Contractors, and will attend the annual ASUC AGM later this month, highlighting Mixamate’s commitment to the sector:

“Mixamate is extremely pleased to be a part of the ASUC,” added Smith. “A huge amount of the jobs we are called into now revolve around basement work and underpinning. As the Chairman of the Batched on Site Association and and the Managing Director of a firm that has taken significant steps in recent years to enhance the quality of its own in-house testing and service technologies, I am very pleased to be affiliated with an organisation that takes an equally thorough approach to high standards and quality control within the industry. We look forward to working with the ASUC as closely as possible.”

Advantages of liquid screed
Liquid screed is growing in popularity in the construction industry because it can be administered more quickly than traditional mixes, and requires less cleaning and labour. The material can also be used to create thinner and more conductive mixes for flooring, making it perfect for underfloor heating. It also provides a much easier mixture to work additives into.

Mixamate has been taking significant steps in recent years to advance the traditional mix-on-site process. The Company’s unique Conqueror mixing truck runs on an on-board computer that digitally calculates the exact strength of concrete and screed mix, making it more accurate than volumetric mixers. In 2015, the company rolled out its all-in-one concrete pumping truck, followed by its all-in-one dry-screed pumping truck, allowing it to provide delivery, mixing and pumping within a single service. This new addition expands that technology into the liquid screeding sector and allows the company to provide these services to a wider customer base.

About Mixamate
Mixamate is a leading UK provider of mix on site concrete and screed, providing unique all-in-one technology for the delivery, mixing, and pumping of mix on site pumping and screed. For more information visit: www.mixamate.co.uk.