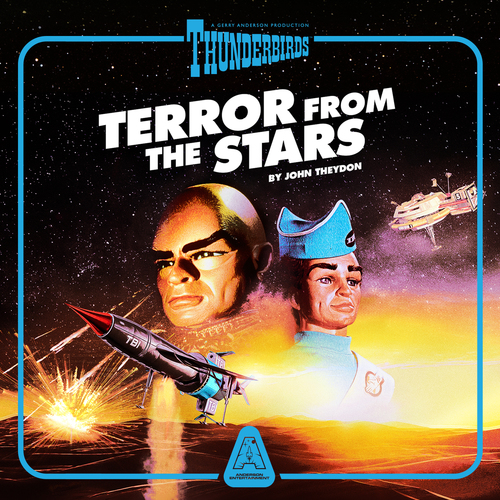 It’s the news Thunderbirds fans of all ages have been waiting for. Parker and Lady Penelope, two of the best-loved characters from the hit 60s show, are back!

Yes, Parker and Lady Penelope, along with the Tracy brothers, Jeff Tracy, the evil Hood and the brilliant Brains, can be heard again very soon in the first of an exciting new series of audiobooks coming out from this May.

In Thunderbirds: Terror from the Stars the ex-con cockney chauffeur Parker and the stylish aristocrat Lady Penelope, originally voiced by David Graham and Sylvia Anderson, will be brought to life by voice actor and impressionist Jon Culshaw, star of Dead Ringers and Spitting Image, and actress Genevieve Gaunt, also known as Pansy Parkinson in Harry Potter and the Prisoner of Azkaban, and Wilhelmina ‘Willow’ Moreno Henstridge in the popular soap opera The Royals.

But that’s not all. Jon, a fan of Gerry Anderson since childhood, will also be voicing Jeff Tracy, the head of the Tracy family, who coordinates rescue missions from his futuristic base on Tracy Island. As he says: “I grew up with Gerry Anderson’s shows, so working on this audiobook has been a delight. I also love voicing contrasting characters – and they don’t get much more different than Jeff Tracy and Parker!”

And fans of the still enormously popular original Thunderbirds series are in for another treat. In a charming gesture, the Thunderbirds: Terror from the Stars audiobook includes a message from David Graham, who played the original Parker (along with Brains and Gordon), saying that, in his 96th year, he feels he now deserves a rest and is passing the baton to the new team. As well as Jon and Genevieve, the new line-up includes Wayne Forester, Justin T Lee, Joe Jameson and Anna Leong Brophy.

This audiobook, an adaptation of John Theydon's 1965 book Thunderbirds, is the first of Anderson Entertainment's new range of audio versions of classic Gerry Anderson stories from the 1960s and 1970s, thanks to a new licensing deal with ITV Studios. More audiobooks are now in production and will be available soon, including Stingray, Joe 90, Space:1999, UFO and, of course, even more Thunderbirds stories!

Thunderbirds: Terror from the Stars is available for pre-order from the 11th of April in a four-CD set that includes a behind-the-scenes documentary. There’s also a hardcover reissue of the original book. Both are available exclusively from the Gerry Anderson store (shop.gerryanderson.co.uk). A digital version of the book can be exclusively pre-ordered from Big Finish (bigfinish.com).

The release of the audiobook and hardcover edition will take place in May – soon after the excitement of the first-ever Gerry Anderson Day on the 14th of April. Gerry Anderson Day celebrates the life and works of the legendary producer with special events, live streams, unique new content from Gerry’s own production company Anderson Entertainment, one-off and limited edition products, and a special YouTube programme.

There are also guest appearances planned from some very big-name celebrity fans. Expect some fun – and a lot of surprises – finding out who they are! You can find out more – and order your copy of Thunderbirds: Terror from the Stars – at shop.gerryanderson.co.uk!