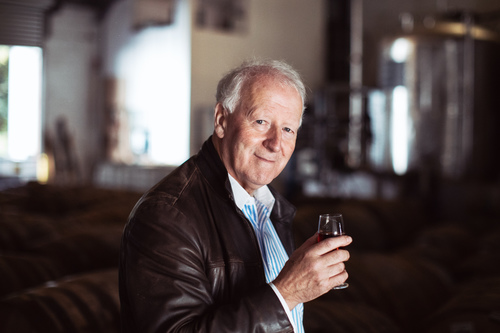 Renowned for his role as Master Distiller at The GlenAllachie Distillers Company, Walker has spent the past five decades creating some of the world’s most coveted whiskies, achieving the fiercely contested title of World’s Best Single Malt at the World Whiskies Awards 2021.

The landmark year sees the release of a celebratory trilogy of Speyside Single Malts; The GlenAllachie Past, Present and Future Series. The momentous whiskies represent key milestones throughout Walker’s vibrant career.

The first instalment, The GlenAllachie Billy Walker 50th Anniversary Past Edition, is unveiled today as a fully Sherry matured 16-year-old Single Malt (UK RRSP GBP 225). This bottling represents Walker’s past when he made a name for himself by releasing heavily Sherried expressions to great acclaim, with many Scotch fans believing he played an instrumental role in developing this style category.

Walker, who is a qualified chemist, has been at the helm of The GlenAllachie for almost five years, having previously led an illustrious and expansive career across numerous household name brands and companies. His enviable experience spans iconic names including Ballantine’s, Deanston, Tobermory, BenRiach, GlenDronach, Glenglassaugh and The GlenAllachie.

From his time working on these world-renowned brands, Walker has acquired an extensive understanding of whisky maturation; selecting the finest casks, continually evaluating the aging spirit, re-racking into new wood to elevate the flavour experience, and determining the perfect time for bottling. This incredibly broad spectrum of experience has translated into an unrivalled reputation amongst his peers and exceptional quality whiskies enjoyed across the globe.

Walker has achieved some exceptional accolades, most recently including:

In addition, Walker was inducted into Whisky Magazine’s prestigious Hall of Fame last year – a permanent tribute to the lasting contribution he has made to the world of whisky.

Business partner Trisha Savage, who has worked beside Walker for the majority of his career, comments:

“Working alongside Billy for 35 years has been a total pleasure. I can honestly say I’ve never come across anyone with his level of drive, dedication and passion for Scotch whisky.

“His focus has always been to achieve ‘perfection’; only using the highest quality of wood and monitoring the spirit every step of the way. Nothing leaves the cask until it’s deemed to be exceptional.

“I would personally like to congratulate Billy on his 50th Anniversary year. You’re a true industry legend, and I was lucky enough to share the journey with you for 35 incredible years.”

“Of course, there are some great memories and I truly pride in many of the achievements which our teams have achieved over the past half-century.

“The latest adventure is The GlenAllachie Distillery, and without question, we are so very fortunate to be steering this great distillery into the future, introducing its whisky to an ardent international audience.”

The GlenAllachie Billy Walker 50th Anniversary Past Edition is available to purchase through global specialist retailers, with a UK RRSP of GBP 225.

Graduating from the University of Glasgow in 1967 with a BSc Honours Degree in Chemistry, a youthful Billy Walker had the perfect foundations to enable him to build an intimate knowledge of the science behind whisky making and flavour development.

Billy’s whisky journey began in 1972 at Hiram Walker & Sons – the company behind Ballantine’s at the time – where his role covered almost all aspects of production. After four years, he moved on to Inver House Distillers, taking up the position of Master Blender in 1976.

Fast-forward to 1982, Billy joined Burn Stewart Distillers where he went on to spend two decades, most notably playing a key part in the resurrection of Deanston and Tobermory Distilleries. When the company was sold, an entrepreneurial Billy was left to decipher his next move.

The next twelve years saw him acquire BenRiach, GlenDronach and Glenglassaugh Distilleries, each of which were either mothballed, closed or under exposed to the market. It was at this point in his career where Billy truly made a name for himself within the industry, leading the brands’ rejuvenation and subsequent phenomenal success.

Billy’s next move was to his current position as owner and Master Distiller at The GlenAllachie Distillers Company, encompassing The GlenAllachie single malt, White Heather blended Scotch and MacNair’s Boutique House of Spirits. 2021 saw Billy delve into a new spirits category for the first time, releasing a new experimental rum line under the MacNair’s label; Exploration Rum.

It’s from this incredible record of success that Billy has earnt widespread acclaim and recognition for being one of the most prominent whisky figures of his generation.

One of Scotland’s few independently owned and managed distilleries, The GlenAllachie is led by industry veteran, Billy Walker, who boasts a 50-year tenure in whisky. With an emphasis on wood policy, The GlenAllachie’s cask budget for 2022 stands at an eye-watering £2m/$2.6m. With 16 on-site warehouses holding over 50,000 casks, we have complete control of the end-to-end maturation process.

The GlenAllachie focusses on quality over quantity, which is why we chose to reduce our production capacity from 4m to 500,000 Litres of Alcohol and increase our fermentation period to 160 hours for an ester rich, fruity spirit.

We believe age and integrity matter, which is why all our whiskies carry an age statement, and are bottled at a minimum of 46% ABV, natural colour and non-chill filtered for maximum flavour experience.

Further information on the distillery and company can be found at www.theglenallachie.com