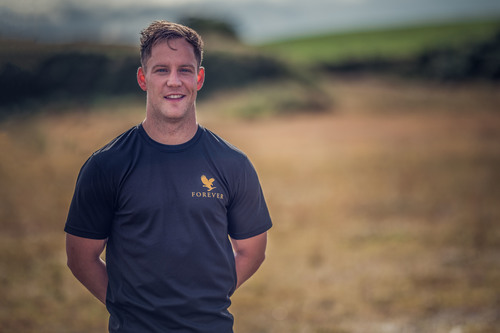 Kieran McGeary, Tyrone Senior inter-county Gaelic footballer, and 2021 GAA/GPA Player of the Year, has been signed by health and wellness company Forever Living as brand ambassador for the UK and Ireland. He is the company’s first Irish sports ambassador.

Kieran (aged 28), grew up in the hills of Pomeroy and began his journey in GAA at just six years old. His success in the white and red jersey started in 2012 winning the Ulster Minor championship followed with Captaining the Tyrone U21s to All Ireland success in 2015. In 2021 he was part of the Tyrone Senior panel who won the much sought-after Sam Maguire trophy. PwC named Kieran an All Star at No.7 along with Footballer of the Year.

Commenting on his ambassador role, Kieran said, “I’ve been using Forever’s products to support my busy lifestyle; I am always on the go both on and off the field. As I have got to know the company and its brand values, it was a natural fit for me to become an ambassador.”

Bob Parker, Forever Living’s country manager for the UK and Ireland said, “Gaelic football, under the umbrella of the Gaelic Athletic Association (GAA) is Ireland’s most popular spectator sport. It is, put simply, part of Ireland’s DNA. It remains an amateur game where players, even at the highest level, do not receive payment for playing and the volunteer ethos remains one of the most important aspects of the GAA. Kieran is an embodiment of the commitment and dedication that is required outside of his professional life as a PE teacher to reach the elite level that he has in Gaelic football. His love of the game and dedication is an inspiring example of what is possible. His work ethic and commitment are qualities that completely align with Forever’s values and we are proud to have his association with the brand.”