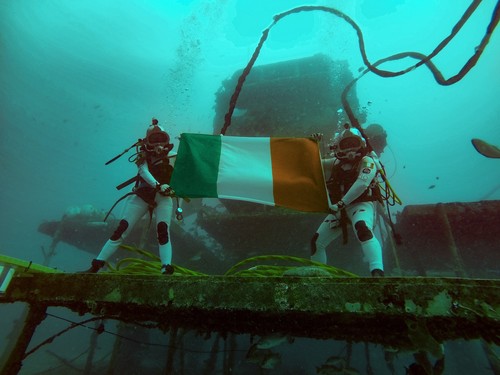 Whether they’re in warzones, Antarctica, Everest, it’s about being prepared to support people outside a traditional hospital environment

NASA aquanaut Dr Marc O’Griofa, from Dublin, Ireland, is making his way to Edinburgh ahead of the the four-day World Extreme Medicine Conference and Expo, which will be held at Dynamic Earth from Friday 18 to Monday 21 November.

In Marc’s work with NASA, he has been testing new DNA sequencing technology that will one day be used on space missions. In order to simulate the extreme isolation experienced by astronaut crews, Marc and his colleagues on the NASA Extreme Environment Mission Operation (NEEMO) have spent weeks at a time in the Aquarius Undersea Reef Base off Florida.

Marc said, “Living with five other people in a small base 20 metres below the surface of the Atlantic Ocean presents a unique set of medical challenges.

“Even though we aren’t far from the surface, we’re extremely isolated. Our health needs to be managed much in the same way as astronauts on the International Space Station need to manage theirs. If anything goes wrong, it’s not just a case of calling an ambulance.

“The World Extreme Medicine Conference brings together a huge number of medical professionals who come up against that same problem in their jobs – but not because they’re under the sea. Whether they’re in warzones, Antarctica, Everest, it’s about being prepared to support people outside a traditional hospital environment. It’s a completely different set of skills to clinical medicine, and the World Extreme Medicine Conference is a great opportunity for us to share expertise and knowledge and inspire one another.”

Mark Hannaford of conference organisers World Extreme Medicine, said, “It’s great to have someone with Mark’s expertise and experience in internationally renowned scientific projects on board. What he does at the Aquarius Undersea Reef Base is a perfect example of what World Extreme Medicine is about, and his knowledge will benefit medical professionals in a wide range of fields. With support from astronauts such as Tim Peake and Kate Rubins and from aquanauts such as Marc O’Griofa, we’ve got a mix of people working at the highest altitudes and the deepest depths possible!

“The area of extreme medicine is in growth, and our message is that it’s a great alternative to a traditional clinical career. My belief is that there’s never been a more exciting time to work in medicine, and the fascinating speakers at the World Extreme Medicine Conference will prove that point.

“We are thrilled to be bringing 100 speakers to Edinburgh at a unique event attended by 800 doctors, nurses, paramedics, surgeons and medical students. New medical research findings will be shared, making the conference an unmissable and historic event.”

The conference’s attendees represent an eclectic mix of disciplines, united by one thing: they all specialise in medical practice conducted away from a usual clinical setting, typically in remote and sometimes dangerous locations.

Dr David Nott, an NHS surgeon who spends several months of each year working overseas for Médecins Sans Frontières and the British Red Cross, will be speaking about his recent work at a makeshift hospital in Aleppo, Syria, and other conflict zones.

Peter Skelton, a London-based physiotherapy and rehabilitation specialist who has worked in emergency teams in Ecuador, Nepal, Gaza, Iraq, the Philippines, Libya, Jordan and Haiti, will be speaking about the importance of Psychological First Aid training to responders in disaster situations.

Speakers come from as far afield as Australia, such as John Cherry, a rural doctor working in Orange, New South Wales, around 150 miles west of Sydney. Dr Cherry has had an incredibly varied career and will be speaking about how he created the blueprint for preparing ESA astronauts for medical situations in space.

American MD Will Smith is travelling from Jackson, Wyoming, where he is the US National Parks Medical Director. He provides consultancy services to extreme medicine and rescue organisations across the world and will be sharing his experiences of practicing medicine in remote and austere locations.

Speakers include the elite sports expert, Edinburgh-based Dr Andrew Murray, who has worked for the Olympic, Paralympic and Commonwealth games. He is also an incredible athlete in his own right, having run 4,300 km from Scotland to the Sahara Desert and completed a husky trek in -40C in Outer Mongolia.

Londoner Eoin Walker is a Pre-Hospital Mass Casualty Incident Management Paramedic with the London Air Ambulance, and will be discussing prehospital care alongside Zoe Hitchcock. In 2013, Zoe suffered a cardiac arrest whilst shopping in Oxford Street, central London, and Eoin was the first on the scene and re-started her heart.

Location: Dynamic Earth, Edinburgh, EH8 8AS
Dates: Friday November 18 to Monday November 21
Ticket information: http://www.extrememedicineexpo.com/events/event/extreme-medi... Prices from £124.17 (for one day) to £825.00 (for all four days)
Website: http://www.extrememedicineexpo.com/
Videos: Being a Doctor Just Became the Most Exciting Career https://vimeo.com/170846844
Extreme and Wilderness Medicine – Our Story https://www.youtube.com/watch?v=BhPrFGFIFXI

High resolution imagery and interviews are available on request. Journalists are invited to attend the conference and are asked to register their interest as early as possible.

The World Extreme Medicine Conference and Expo will take place at Dynamic Earth, Edinburgh, EH8 8AS from 18 – 21 November 2016. Bringing together many of the world’s brightest medical minds, it will focus four core disciplines:

The exposition’s mission is to break down barriers, build bridges and make connections within the extreme medicine community.