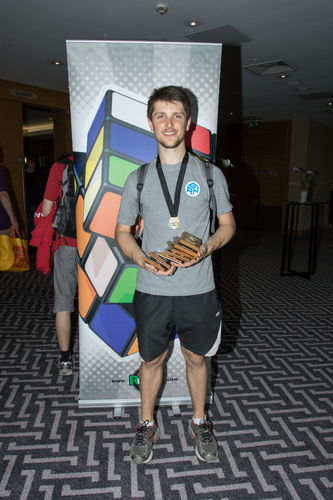 It’s a fantastic experience to have set two new world records this weekend, and to have also won the 3x3x3 Rubik's Cube event

More than 180 of the world’s most accomplished Rubik’s Cube speedcubers attended the London Open at the weekend (8-9th July) as new world records were achieved in the 6x6x6 and the 7x7x7 cubes.

Lynette Norris of John Adams Leisure, the UK distributor of Rubik’s cubes, added, “The London Open is a perfect event for us to sponsor – attracting some of the world’s most prolific speedcubers, it’s the perfect place for them to limber up ahead of this week’s World Championships.”

The London Open Speedcubing Championships took place across the whole weekend (8th-9th July 2017) at the Hilton London Canary Wharf, and was well attended by public spectators.

Cubes of all different configurations were solved at the Open, using a number of criteria including both hands, one hand, feet and even blindfolded.

For more information about the Rubik’s Cube, including fun facts, visit www.rubiks.com

Rubik’s Cube® is a registered trademark of Rubik’s Brand Ltd.