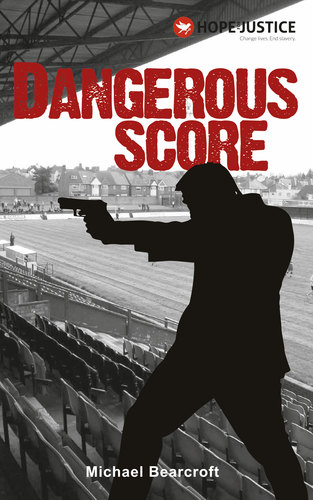 Estimates suggest that over 21 million people are living in modern slavery today, with over 10,000 of those living in the UK. It is also the third largest source of illegal income, only exceeded by drugs and arms trafficking. As Anti-Slavery Day approaches on the 18th October, author Michael Bearcroft has re-released his successful novel Dangerous Score which explores the world of corruption, organised crime and human trafficking, pledging that £1 from every book sale will go directly to Hope for Justice.

Following an early career as a junior footballer for Sheffield United, Michael continued to be involved in the football industry for many years, as the Chairman of Corby Town F.C and sponsor of both Rothwell Town F.C and Kettering F.C. It therefore seemed logical that the sport he knows so much about would feature as the backdrop for Dangerous Score.

In the book, Michael brings together the worlds of football and organised crime as they collide and become entwined in a bloodthirsty, bitter tale of love, lust and murder. When successful footballer Jason Clooney’s wife unexpectedly leaves him in Australia, he returns home to the UK to start a new life in Sheffield. A winning goal catapults his home team- Kettering Town Football Club- into the national spotlight. However, a brief encounter with a mysterious woman called Jess, propels him into the underworld of international organised crime and human trafficking, changing his life forever.

Michael began researching human trafficking whilst writing his novel and was astounded at the sheer scale of the problem. He decided that he wanted to do whatever he could to help support those forced into modern slavery which led to his new partnership with Hope For Justice, a global charity founded in the UK in 2008 with the aim of working to end modern slavery and human trafficking.

In the past three years, Hope for Justice has rescued 350 people from human trafficking in the UK and is actively working to help many more.

‘Human trafficking is a hidden crime and it’s happening all around us. The main character in Dangerous Score stumbles into this secret world and finds himself submerged in the underbelly of organised crime. I’ve partnered with Hope for Justice because I want to support and bring more light to the desperate plight of people around the world and in the UK. This charity is doing truly amazing things that are transforming people’s lives and I want to help let more people know about them so that collectively, we can do more to eradicate this truly heinous crime,” explains Michael.

Dangerous Score (£9.99, New Generation Publishing) is available from Amazon and all good bookshops. £1 from every sale goes to Hope For Justice.