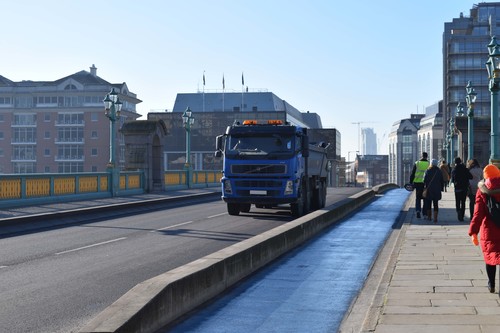 What can the transport industry do to keep drivers and the public safe?

Letchworth, January 30, 2018 – Over half of drivers are shocked by the increase in frequency of ‘Vehicle as a Weapon’ (VAAW) attacks over the past 18 months, according to a new UK survey of commercial fleet employees.

The research unveiled 74% of drivers are being offered little to no training to assist them in protecting their vehicle against the risk of being taken for use in a terror attack.

The survey was carried out by a leading training provider for the road transport industry and TFL’s primary DCPC training contractor, Fleet Source. It revealed that 76% of respondents would like to carry out training to learn about the nature of the threats that they may face and a range of safety precautions they should implement to significantly reduce the possibilities of their vehicle being hijacked or stolen and used in a terrorist attack.

“Following the recent major VAAW (Vehicle as a Weapon) incidents and with the UK being on a severe level of terrorist alert, we wanted to look at the industry’s views and opinions on the subject,” said Nick Caesari, Managing Director at Fleet Source, the company behind the recently launched ‘Terrorism Risk & Incident Prevention’ training for commercial fleet drivers. These incidents are very real, and the industry should be doing all they can to prevent drivers from being involved in these horrific events,” Caesari continued.

The survey also revealed that ‘out of city’ operators are less concerned (42%) about their vehicles being taken for use in a terror attack than those who frequently drive in the city (64%), when the reality is, they’re at the same level of risk.

“I think we’re far more vulnerable on a Friday afternoon/evening, the guys are finished, they’re in the pub and the keys have been taken. Those keys, may not even be missed until Monday morning, by which time that vehicle has been taken from North Wales and killed 600 people in London,“ said a respondent*.

“This is a very serious matter, terrorists are opportunists and operators should consider implementing policies to prevent their drivers from allowing strangers into their cabs. For example, knowing what identification government authorities should be providing to be able to identify whether the individual is legitimate. Being educated on these policies can help protect drivers and the public from the risks of terrorism,” Caesari added.

“The research suggests drivers feel that authorities are not taking responsibility for the safety of the transport industry when it comes to the danger of terrorism. This is why we created TRIP. TRIP has been designed so that commercial fleet operators, managers and drivers can be educated on the risks of terrorism, the nature of the threats that they may face and a range of safety precautions they should implement to significantly reduce the possibilities of their vehicle being hijacked or stolen and used in a terrorist incident,” Caesari concluded.

“This is a hot topic and one that affects all drivers. With a greater emphasis placed on drivers and the security of the vehicle, we can make a difference in minimising the risk of one our vehicles being taken and used in a VAAW attack,” said a respondent. “Raising awareness to all those within the transport industry, including operators and managers should make the world safer for us all,” they concluded.

*The Fleet Source survey of commercial drivers and operators was anonymous.

Fleet Source provides an innovative approach to simplify the legal obligations for work-related road transport and a comprehensive range of products and services that provide operational confidence in compliance, safety and environmental awareness. Our network of fleet specialists, trainers and compliance auditors have a combined wealth of transport experience and knowledge gained from proven backgrounds including, enforcement bodies, transport authorities, commercial and military logistics.

Fleet Source has the UK’s largest fleet compliance auditing team and as the exclusive accreditation body of the FORS Community Partnership (alongside AECOM and the Chartered Institute of Logistics & Transport), it now conducts nearly 500 FORS (Fleet Operator Recognition Scheme) audits annually, across the UK & Europe.

This press release was distributed by ResponseSource Press Release Wire on behalf of The PR Room in the following categories: Men's Interest, Motoring, Transport & Logistics, for more information visit https://pressreleasewire.responsesource.com/about.