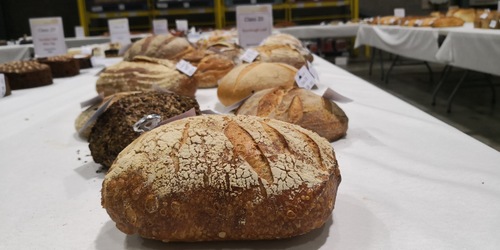 Withies Delicatessen, based at the Willows & Wetlands Centre in Stoke St Gregory, Somerset, has taken the top prize in the Sourdough Bread category of Bako Southwests annual competition.

The delicatessen fought off strong contenders to claim the top spot in the prestigious competition on Sunday with their signature white loaf, which is made the traditional way using only three ingredients, including a 200 year old starter that originated in Italy.

‘The starter was given to me by a chef friend at an Italian restaurant in Cardiff,’ said Withies Deli’s Jamie Jensen. ‘It hails from a small village outside of Rome and has been lovingly looked after for over 200 years.’

‘Sourdough bread is increasingly popular at the moment, both for its taste and its health benefits,' Jamie went on to say. ‘Bread is the staff of life. Humankind has spent the last 10000 years evolving hand in hand with wheat and the sourdough baking technique. It’s only since the turn of last century that it has caused our bodies any problems, and that’s when the mechanised processes started and rushed bread through factories, producing loaves that our bodies have been unable to break down sufficiently.’

Jamie explained that he uses a long, slow fermenting process to make his sourdough, which has no chemicals or fast acting yeasts added to it. The 72-hour process each loaf goes through breaks the starch chains down into manageable sizes, meaning your gut does not have to do this and many people do not experience the bloat that commercially baked bread produces.

‘I’ve even had customers come in the shop and hug me, saying they haven’t been able to eat bread for years but they’re buying a loaf a week off of us now. It makes them feel good and it makes me feel good!’ Jamie added.

The competition was sponsored by specialist flour producer Ireks and run by Bako Southwest, a co-op bakery supplier that covers the Southwest of England and Wales. Thousands of bakers attended and the competition at the judging table was fierce.

‘I knew my bread was good’, Jamie enthused. ‘We supply a growing number of pubs, restaurants and cafes like The Hatch Inn and Kitchen at Jordans Courtyard and are looking to roll out to other venues such as hotels, shops and B&Bs. But to win the top prize the first time we entered is magical. It’s given us the confidence to try for the National BIA awards next year.’

‘What a great way to kick off Awards Week as we’ve dubbed it. Withies Delicatessen has been running at the Willows & Wetlands centre for just over a year now and we’re finalists in Somerset Business Awards Best New Business and Somerset Life Food & Drink Awards Best Independent Retailer, both of which are being drawn at the end of this week. So many black-tie events, so much good food,’ Jamie laughed. ‘Fingers crossed this is the first award of many!’

More files, logos, photos and other information can be found here:
https://www.dropbox.com/sh/248zwcdxk3uqel6/AADuNC-5OvgbnCSrc...