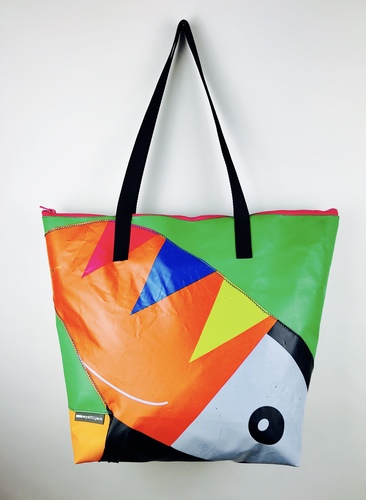 Holidaymakers can see their unwanted lilos transformed into designer bags and pouches thanks to a holiday company that’s pledging to reduce the number of inflatables sent to landfill.

Holiday Hypermarket has teamed up with sustainable designer Wyatt and Jack to encourage customers to turn their holiday inflatables into one-of-a-kind bags, with the package-holiday specialist picking up the postage costs for sending the plastic products. The pre-paid labels can be downloaded here:

Whether transforming a blow-up unicorn, a giant rubber doughnut, a classic lilo or any other weird-and-wonderful inflatable, the designers at Wyatt and Jack will work their magic. They'll create a new pouch or tote bag and generate little, if any, waste.

Georgia Wyatt-Lovell, founder of Wyatt and Jack, says: 'Holiday inflatables are great fun for a week or two, but when the holiday’s over, most people have no further use for them. By taking part in our inflatable amnesty, you can turn your lilo into something that’s unique and practical and literally carry around the memories of a wonderful holiday and cut down on plastic waste.'

For this partnership with Holiday Hypermarket, Wyatt and Jack is offering a 15% discount on all purchases, with prices for A5 pouches starting from just £8.

The initiative follows research of 2,000 British holidaymakers by Holiday Hypermarket that found:
- 25% leave their lilo at the hotel at the end of their holiday
- 9% throw their lilo into the bin before heading home
- 57% of holidaymakers won’t reuse a lilo left behind by someone else

With Association of British Travel Agents’ (ABTA) figures suggesting there will be more than eight million package holidays taken by Brits in 2019*, these figures imply that:
- More than two million people will leave their lilo behind
- More than 700,000 holidaymakers will throw their inflatable into the bin

Craig Duncan of Holiday Hypermarket says: "We were astounded by how many British holidaymakers say they abandon their lilos after their holidays. Plastic pollution is a real problem and we all have to think about the decisions we take and the impact they have on the destinations we visit.

"During our research, we spoke to hotels and they described lilos as an awful problem that is getting worse. When a holidaymaker leaves a lilo behind, hotels have little choice but to store them or send them to the local landfill.

"We asked holidaymakers if they would use free lilos and inflatables provided by their hotel, but more than half said no. This means that even if people think their left-behind-lilo will be used by someone else, the chances are it won’t, as most holidaymakers prefer to buy their own.

"This plastic problem needs smart solutions, and we are delighted to team up with Wyatt and Jack to give holidaymakers the opportunity to do something useful with their lilo after their holiday.'

To find out more about upcycling your lilo and to download the free Holiday Hypermarket postage label for sending inflatables to Wyatt and Jack, visit https://www.holidayhypermarket.co.uk/hype/love-your-lilo/.

About Wyatt & Jack: Wyatt and Jack is a sustainable British brand that has been making bags and accessories from up cycled vintage deckchair canvas and broken bouncy castles since 2010. Follow then on social media @wyattandjack and #inflatableamnesty.