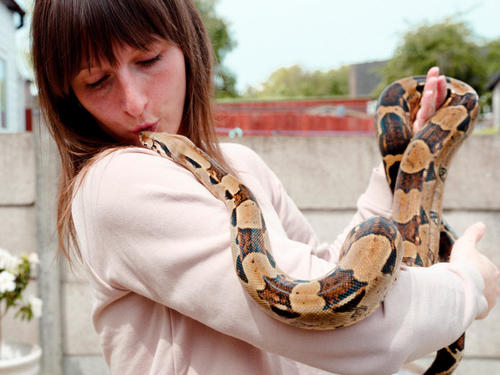 • Pets that live with smokers can develop a range of health problems yet a third (32%) of frequent smokers in the UK don’t believe that smoking influences a pet’s health. 1

• 28-year-old Martine from Birmingham smoked 10-a-day before quitting for her beloved pet snakes and tarantulas.

• Quit Cigarettes is the first mission from Change Incorporated, an editorially independent, purpose-driven online channel from VICE that will work with global businesses to tackle some of society’s biggest issues. This first mission is funded by Philip Morris International.

New research from purpose-driven website Change Incorporated has highlighted that one third (32%) of frequent smokers in the UK don’t believe or know that smoking can impact their pet’s health, putting their beloved animals at risk.

Change Incorporated caught up with 28-year-old supermarket porter Martine from Birmingham, whose collection of exotic animals is her passion2. In her spare bedroom Martine proudly keeps her beloved pets, including Hugo a boa constrictor captive-bred from Colombia, and Dexter a crested gecko, amongst other different species of tarantula, centipede and a scorpion.

Previously a 10-a-day smoker, Martine became motivated to quit after one of her pet snakes called Pumpkin contracted a respiratory infection due to cigarette smoke exposure. Desperate to save her pet, Martine spent over £2,000 on vet bills, and eventually became financially unable to pay the costly medical bills. Martine was forced to give Pumpkin away to someone that could afford her treatment.

Determined to prevent any more of her animals suffering from ill health, Martine kicked her 10-a-day habit and now spends the money she has saved from buying cigarettes on her animals. While spending her free time with her beloved pets or boyfriend Jake; who since meeting Martine has himself accumulated 14 different varieties of pet tarantula.

As Martine comments, “Post-smoking life, I can spend every waking moment I have either with my animals or with my family. The connection I have with my animals is definitely stronger now that I have quit smoking. They are more comfortable being handled and are happier.”

Pets exposed to passive smoking can develop a range of health problems including cancers, breathing difficulties, skin infections and eye problems. 85% of tobacco smoke is invisible and pets can easily inhale toxic particles that layer on surfaces and furniture 3. In particular, cats regular self-grooming exposes them to smoke toxins that are left on their fur. Even pet fish are at risk of smoking induced illnesses triggered by soluble tobacco toxins that penetrate the water in fish tanks.

Researchers at Glasgow University found that pets who inhale their owners’ second-hand and third- hand smoke develop a host of health problems just like humans who inhale someone else’s smoke.4

Professor of Small Animal Medicine and Oncology Clare Knottenbelt at commented in the study, “Pet owners often do not think about the impact that smoking could have on their pets. While you can reduce the amount of smoke your pet is exposed to by smoking outdoors, stopping smoking completely is the best option for your pet’s future health and well being.”

ABOUT CHANGE INCORPORATED
Change Incorporated is a new editorially independent channel from global media brand VICE that aims to create measurable change on issues important to VICE’s global audience. The purpose-driven channel will have editorial control and independence and will take funding from a small number of businesses to undertake different ‘missions’. The funding is primarily to support the best journalism and most compelling content on the Internet.