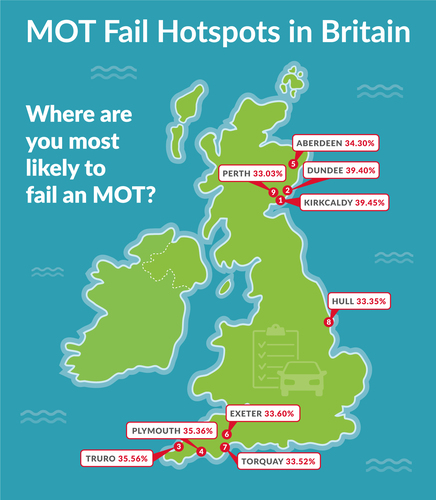 • Nearly 40% of drivers fail their MOTs in Kirkcaldy and Dundee - the highest fail rates in the country.
• Those living in Enfield and South London are most likely to pass their MOT, with less than a 16% fail rate - the lowest in the UK.
• 12.8% of MOT fails are down to problems with lamps, reflectors and electrical equipment.
• Nearly 1 in 10 fail an MOT due to suspension.
• Please see base of press release for all tables of data provided

An investigation into the best and worst regions for MOT pass rates showed surprising patterns. The top pass rates are all in South East England, and on the flip side, the most failures fall in Scotland.

The government research, analysed by CarTakeBack.com found some high fail rates in Kirkcaldy (39.45%) and Dundee (39.4%). Over 1 in 3 motorists are bound for an MOT failure there.

In better news, drivers in the London and Essex regions are most likely to pass their MOT with flying colours. This area of Britain fills pretty much all the top spots, displaying the UK’s best pass rates.

Where are you most likely to fail an MOT?

Where are you most likely to pass an MOT?

Rebecca Currier, Marketing Manager at CarTakeBack says: “CarTakeBack branches across the UK regularly see cars sold to them that have failed an MOT. Minor fails can often be easily repaired, relatively cheaply. However, when a car fails and it’s likely to cost more than a car is worth to get it to pass an MOT test, those cars often end up being recycled. With a change in the law recently, cars that fail can’t be driven off the MOT centre site, in these instances it’s vital that the cars are collected from the MOT centre for the customer.”