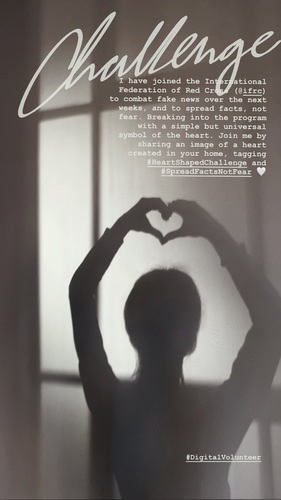 By signing up, influencers can use their content and production expertise to get vital authentic messaging quickly and clearly to their millions of engaged followers - fighting the COVID-19 infodemic

Geneva, London and New York, 5 May 2020: Billion Dollar Boy, the creative agency for the influencer age, and the International Federation of Red Cross and Red Crescent Societies (IFRC) are creating the world’s first global influencer network to tackle the COVID-19 infodemic.

Edward East, CEO and Founder at Billion Dollar Boy, said: “Social media should be a very effective tool for reaching a global populace. But with misinformation and fake news so prevalent, that message has to be unified and delivered from trusted sources. Our IFRC network of influencers ticks both these boxes. Instead of being continually vilified, influencers can now put their vast skill-sets to work delivering potentially lifesaving approved messaging to millions of people when it is needed the most.”

The network will launch with more than 30 influencers from across four continents with a combined reach of more than 2 million followers, with more expected to join every day.

Every week the IFRC will send the influencer network an approved message that they want to disseminate. The influencer will then take that messaging and create their own content. This will then be vetted by Billion Dollar Boy and officially approved by the IFRC for distribution. There is a landing page here, where influencers can apply to volunteer their time and content to the cause.

Nichola Jones, IFRC’s Cross Media Manager, said: “Getting the right information out there when an emergency strikes is as important as healthcare. Making sure people have access to facts and trusted sources in a situation like this saves lives.”

“Influencers have a crucial role to play in tackling this infodemic and cutting through the noise. They have a level of access to younger people that public authorities or charities don’t have and their relationship with their followers is different. By working together, we can make sure credible content reaches a broader audience and has a positive impact.”

Influencers, who are often unfairly portrayed negatively in the media, can now quickly and easily put their expertise, skills and millions of followers to positive effect during an unprecedented crisis. And because their followers engage with them and trust their content, they are perfectly placed to combat the spread of misinformation and show solidarity with approved IFRC messaging.

Since lockdown in countries across the world, social media use has skyrocketed, making it an ideal channel for reaching people. Data from global research company Nielsen says 33% of people are spending more time on social media during lockdown while Facebook’s own data shows that 70% more time spent across their apps since the crisis with Instagram Live and Facebook Live views increasing by 50% in March.

About Billion Dollar Boy
Founded in April 2014, Billion Dollar Boy is the Creative Agency for the influencer age. With offices in New York and London, it is the agency of record for global brands such as PepsiCo, Walgreens Boots Alliance, L’Oreal, Zalando and Primark. Through the creation and implementation of proprietary technology, it creates dynamic, inventive and innovative influencer marketing strategies, that are tracked and continually optimised to deliver exceptional ROI.
About the IFRC

The International Federation of Red Cross and Red Crescent Societies (IFRC) is the world's largest humanitarian network that reaches 150 million people in 192 National Societies through the work of over 13.7 million volunteers.