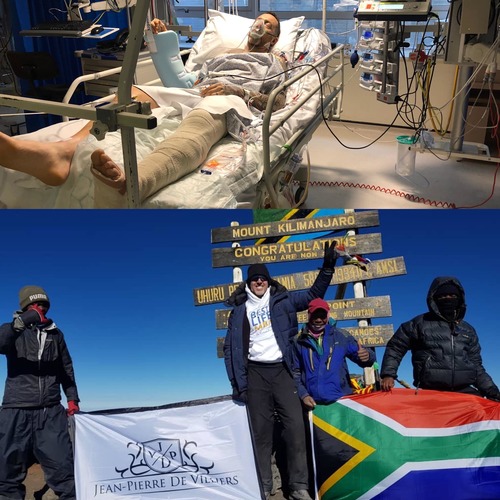 "Climbing this mountain is a huge stretch goal for me after nearly losing my life. This is not just about the goal, it's about who you become in the process. I'll be climbing a mountain, literally. But metaphorically, we are all climbing our own mountain in some way. And people who suffer from mental health are climbing a very difficult mountain. They feel alone, stuck, they don't know where to go next, who to call on. They're scared about what's coming around the next corner. I want to let people know that they are not alone and to inspire them to keep climbing, to find the right people, the right tools, the right environments, and the right challenges to keep climbing their mountain and Never settle! Never give up! Never give in!" JP

Speaker, Author and Athlete Jean-Pierre De Villiers was struck down by a drunk driver in North Devon last year while cycling to raise money for The Brain Tumour Charity. The collision happened just two days before the 10 day challenge was completed. The car hit Mr De Villiers with such force he went over the car and got wedged in between a tree and the barrier at the side of the road with his bike shattered into pieces. Jean-Pierre was luckily found by a driver who saw bike fragments scattered across the road then heard screams. JP as he is known was flown to hospital by the Devon Air ambulance where he remained in intensive care for several weeks with multiple bone breaks to his legs and arms as well as a punctured lung, bowel and heart trauma. Doctors said had he not been so fit he was unlikely to have survived such an impact.

Divine intervention
Despite the crash happening in rural Devon on quiet country roads the first three cars that came across the scene were fortuitously able to assist. The first car that drove by was an off duty paramedic, the second an off duty police officer who was able to secure the road and the third was a member of the local RNLI who was able to give Mr De Villiers Oxygen which he kept in his car. It was clearly not meant to be his time!

Overcoming the odds
Less than 15 months later he has defeated the odds of a full physical recovery and is currently summiting Mount Kilimanjaro while raising money for MIND charity. Doctors have called his swift recovery nothing short of miraculous.

He has been on quite a journey since then, still dealing with daily pain and various issues related to the trauma including PTSD. It has had a huge psychological impact but now more than ever he wants to do what he can to support others with mental health issues proving that you can overcome huge challenges with the right mindset and attitude. Since the accident he has also completed a marathon raising money for the Devon Air Ambulance who saved his life and continues to inspire his followers on social media with his dedication to daily progress.

Members of his coaching community have been so inspired by his progress and bravery they have supported JP through his climb by undertaking fitness challenges of their own which match the elevation of Kilimajaro. Some are running 10k a day throughout October, another is doing 5895 mountain climbers one for every metre of mountain, Anna Moss is Climbing 13 stair staircases at home 80 times a day. Every day. For the month of October = 5895m total elevation. "It's really incredible how much impact he has on others and seeing him do such a challenge despite all he has been through inspires us all to get out there and move!"

His wife said "JP has received so much support since the accident because he does so much work for charity and he's always helping people. He's had thousands of messages, people telling me stories of how he has had a positive effect on them. I found a message on Facebook from a guy saying that during the cycling challenge, JP had stopped to help him fix his car when he broke down, that's the kind of man he is."

The driver who almost killed him was over the limit and disqualified.

JP's story is one of forgiveness, resilience and what you can do with a strong positive mindset and will to overcome. One of the first things JP said when he woke up in hospital was that he couldn't wait to get back on his bike. Mentally planning his next challenges while bed bound was what got him through it.

Since the accident JP has immersed himself in all kinds of healing modalities including living with Buddhist Monks in a monastery, 18 days of silent meditation, natural medicinal therapies, breathing therapies and working with Dr Jo Dispenza. He is also 100% plant based and advocates for leading a healthy balanced lifestyle.

JP shares the practices that helped him push through his fears and make the incredible recovery that he has via his social media channels, talks and in his latest Amazon best selling book ''Spiritual Fitness' an essential guide to developing Mind, Body and Heart.

NOTES to Editors
JP is available for interview or comment on:

Mental Health and Trauma
Spiritual Fitness
The mindset hacks which took him from broken to victorious in 15 months
How to overcome your worst days and challenges
The importance of stretch goals
Forgiveness, Compassion and Altruism

Documentary -The challenge that changed my life

Intro to the climb Videos