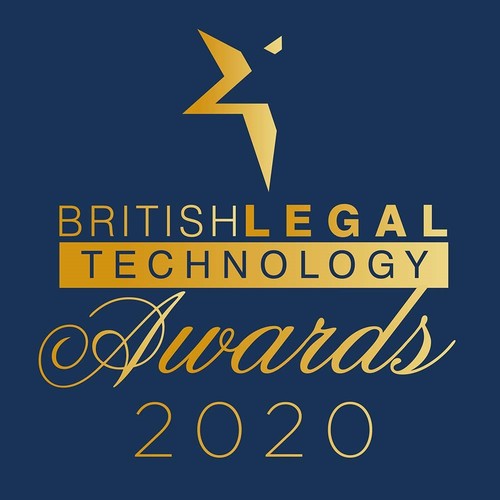 Global law firms, leaders of Cyber Security, an alliance between Law Firms and legal IT vendors, as well as AI solutions vendors were among the winners of the British Legal Technology Awards 2020 (BTLA), organised by Netlaw Media. The winners of these prestigious awards were announced Thursday 12th November 2020 during the first virtual awards ceremony. The event, co-hosted by comedian Ian Moore, was virtually attended by the legal sector elite made up of guests, dignitaries and shortlisted candidates from the world of legal IT and security.

The announcement of the BLTA winners followed a rigorous vetting process, undertaken over several months, overseen by a 21-strong independent expert judging panel.

Three groups of award winners were announced at the annual ceremony – one for UK and EU or International law firms, barristers’ chambers and in-house legal teams, and the other for legal IT vendors and consultants.

The award winners were as follows:

Most Innovative Firm of the Year – Sponsored by Wolfberry

Technology Team of the Year – Sponsored by Sinerix

Technology Venture of the Year

Security Team of the Year

Alliance of the Year

Winner: Clarilis & Slaughter and May

Categories for Legal IT Suppliers

IT Product or Service of the Year

IT Security Provider of the Year – Sponsored by DELTAS

Supplier of the Year

Legal AI Supplier of the Year

The BLTA judging panel also bestowed a lifetime achievement award on Peter Owen, in recognition of the instrumental role he has in shaping the strategy of many law firms throughout the legal sector.

Closing the event’s proceedings, Jacqueline de Rojas CBE, president of techUK, said the BLTA ceremony “offered a wonderful opportunity to celebrate the incredible contribution that individuals and teams have made to innovation and to legal tech. What has struck all of us as a panel of judges is the level of investment in client focused technology and how this is building real competitive advantage. The UK legal sector continues to make real progress and disrupt from within. It is clear that by shining a light on the efforts of those teams who have invested in technology, built diverse teams and demonstrated adaptable leadership, we are creating a strong base for the legal sector to thrive.”

Ms de Rojas’ comments were echoed by Netlaw Media UK and EMEA Managing Director Frances Anderson, whose company organised the virtual BLTA. “Since the opening of nominations for the 2020 BLTAs in February, it’s been enlightening to witness the rapid transformation and innovation being undertaken within the UK and EU legal sectors. Although we were unable to celebrate in person, Netlaw Media is delighted to have recognised the excellent work being driven by legal tech teams, practices and solutions providers alike, during such extraordinary times of change.” She said “This year has been one of the most competitive years’ for the BLTAs and Netlaw Media is thrilled to be at the forefront of showcasing new and innovative solutions that are driving the future of global legal services. I truly look forward to reopening the entries for 2021.”

About ‘The British Legal Technology Awards 2020’:

Nominations for the British Legal Technology Awards 2020 opened in February this year. A shortlist of finalists were announced during a social media campaign in September. The 2020 Awards were once again a complete success and the feedback received has been extremely positive. The event will return to the legal events calendar in November 2021.

The 21-strong BLTA judging panel was once again chaired by techUK president Jacqueline de Rojas. The panel also included IT heads from several international law firms, professors and consultants who specialise in the legal sector, and representatives from the legal IT vendor and consultancy community.

The British Legal Technology Awards ceremony has run since 2017 but was the first ‘virtual’ awards ceremony produced by Netlaw Media, who have delivered an array of virtual events and VIP roundtables throughout 2020, as part of the LegalTech Talks series.