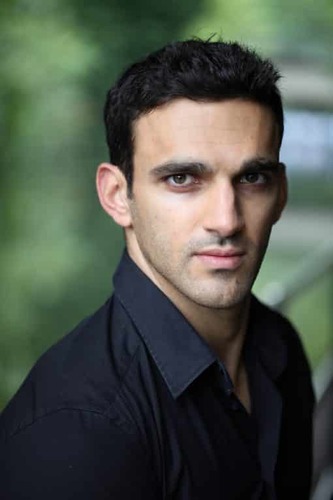 World premiere of ancient tale - 'The Warrior Violinist' - with music by acclaimed American composer, Jay Reise, available on the ESO Digital platform from 18 December 2020 at 1800 GMT and afterwards on ESO Digital.
Watch the trailer: https://www.eso.co.uk/warrior/

Following on from the success of Hugh Bonneville’s narration of Kenneth Woods’s 'The Ugly Duckling' and Henry Goodman’s hilarious rendition of 'Lubin, from Chelm', Davood Ghadami, the charismatic star of BBC EastEnders, joins the English Symphony Orchestra (ESO) for a virtual performance of Jay Reise’s 'The Warrior Violinist'.

Davood Ghadami is most widely known for his portrayal of Kush Kazemi in BBC Television’s popular soap opera, 'EastEnders', since 2014, for which he won ‘Best Newcomer’ at the TV Choice Awards and received nominations for ‘Best Newcomer’ and ‘Best Actor’ at the Inside Soap Awards. Other television credits include series regular Duncan Clark in 'Taggart' as well as roles in 'Doctor Who', 'Top Boy', 'Law & Order' and 'Silent Witness', and as a contestant on the BBC’s 'Strictly Come Dancing'. His film credits include 'Shop Girl', 'John Carter of Mars' and 'Survivor'. On stage, Davood appeared at London’s National Theatre as Amir in Mike Bartlett’s '13', and has performed in numerous productions with Pilot Theatre, an international touring theatre company.

'The Warrior Violinist'
Inspired by an ancient Egyptian fairy tale and the legend engraved on a pink granite slab between the paws of the Sphinx, 'The Warrior Violinist' is a cautionary parable about yearning to be what one is not, and is suitable for family viewing. The story centres around a young lad who plays the violin with an all-consuming passion and then finds another love – the princess of the kingdom.

With music and words by American composer Jay Reise, 'The Warrior Violinist' was commissioned by the Philadelphia-based storytelling troupe Auricolae in 2012, and the original version of the work for violin and cello was released on 'Auricolae: The Double Album' by Avie Records in 2014.

Reise says that the chance to revisit the work was one of the positives in a difficult year; “In the summer of 2020, when the concert halls had closed because of the Covid pandemic, Ken Woods asked me to prepare a version for this recording project. The challenging and disheartening circumstances made recomposing the piece an especially gratifying experience. In addition to fleshing out harmonies, adding contrapuntal lines, and creating fuller and richer orchestral sonorities, I was able to expand the presence of the solo violin (performed here by Zoë Beyers) so it could more actively fulfil its role as the protagonist of the story.”

“It was important to us to make the ESO’s storytelling project as diverse as possible,” said the ESO’s Artistic Director Kenneth Woods, who conducts the performance. “Of course, we’ve included beloved classics from the Brothers Grimm and Hans Christian Andersen, but we’ve also ventured into the world of ancient cultures with 'Lubin, from Chelm', and now in 'The Warrior Violinist'.”

Upcoming works in the Storytelling project include Gemma Whelan in 'The Bremen Town Musicians' by Kile Smith, and Henry Goodman in Tom Kraines’ 'Hansel and Gretel', both of which will be released in 2021. The next concert in the ESO’s ‘Music from Wyastone’ Series is a gala New Years’ Eve concert featuring the music of the Roaring 20s.