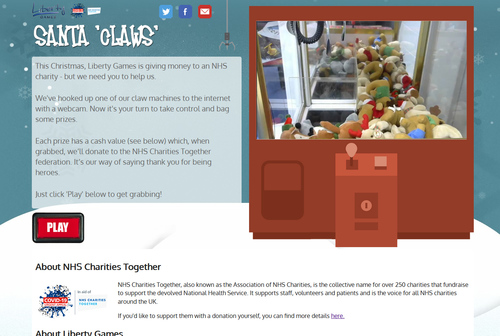 A real arcade claw machine that you can play online - and raise money for the NHS!

A real arcade claw machine that you can play online - and raise money for the NHS!

Liberty Games has today announced the launch of its Santa Claws arcade claw machine. It allows visitors to take control of a claw machine in real time, viewing the action by webcam. Players have 45 seconds to grab a cuddly toy and drop it in the chute.

Each toy has a cash value. Every single one that is safely placed into the chute is added to the tally. After Christmas, Liberty Games will donate all of the money raised to NHS Charities Together, the federation of NHS charities in the UK.

Stuart Kerr, Technical Director at Liberty Games, created the machine. "It started as a fun project to see if we could integrate an old claw machine into the Internet of Things. The technology is Raspberry Pi-based and uses a webcam to show players game footage in real time. It didn’t take many games to realise Santa Claws’ fundraising potential, so we decided to use it to raise money for the NHS."

"As for next year, I can’t say too much, but we have a lot of amusement and arcade machines around the office and I’ve got my eye on one in particular."

Liberty Games is the UK’s leading games room and amusements online retailer since 2004. It sells a vast range of products including pool tables, arcade machines, pinballs, table tennis tables and much more. Based in Epsom, Surrey, it supplies customers all over the UK and overseas.