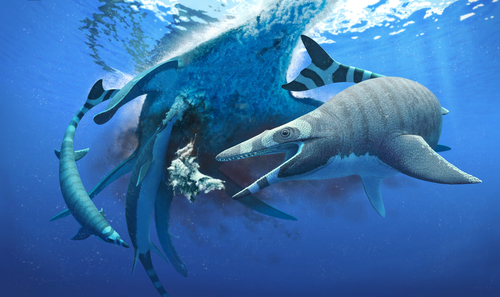 Xenodens is a porpoise sized mosasaur discovered with a strange tooth structure similar to that of certain sharks, including dogfish and sleeper sharks.

The bladelike teeth of Xenodens have never been seen before in any mosasaur species or other reptiles, and the novel dental specialisation adds to the diversity of late Maastrichtian mosasaurids and marine reptiles.

Dr. Nicholas R. Longrich, from the University of Bath, says, “Our best guess is that the specialised teeth served to allow it to cut large fish into bite-sized pieces, and perhaps scavenge from large carcasses, as dogfish and sleeper sharks sometimes do. But we can’t rule out other feeding strategies or other prey. It could probably take a huge range of foods, like modern dogfish, but the bladelike teeth allowed it to take much larger prey than it otherwise could.”

“This discovery is fascinating because it tells us how we can study marine reptile palaeontology to find out more about specialisation, diversity and mass extinction.”

Mosasaurs are marine reptile from the end of the age of dinosaurs. Although they are not dinosaurs, they are distant relatives of monitor lizards and snakes. One hundred million years ago, Mosasaurs invaded the seas.

Initially restricted to coastal environments; it was after the volcanic eruption and extinction event at the Cenomanian-Turonian boundary that produces evidence to suggest Mosasaurus could exploit the niches left by the disappearance of the ichthyosaurs. By the end of the Cretaceous, they had evolved a huge range of species but were cut down by the same asteroid that ended the reign of the dinosaurs.

The discovery is described in a paper published online on 19th January 2021 in the Cretaceous Research journal.

This press release was distributed by ResponseSource Press Release Wire on behalf of Igniyte in the following categories: Environment & Nature, for more information visit https://pressreleasewire.responsesource.com/about.