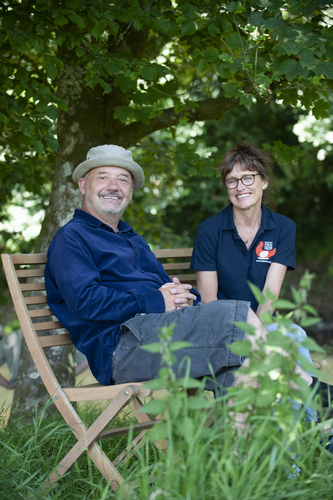 Bob, who has been on our TV screens for over 30 years, often alongside his comedy partner Vic Reeves but more recently in Gone Fishing with Paul Whitehouse, is well known to the BHWT.

In 2020, he and his artistic wife Lisa designed the charity’s Christmas cards which proved very popular. The first run sold out within 30 minutes, was re-stocked several times and raised much-needed funds to help improve hen welfare.

Bob has now become a patron of the BHWT, the UK’s first charity to save laying hens from slaughter and rehome them as family pets.

Jane Howorth MBE, founder of the BHWT, says, “We couldn’t be happier that Bob has become a patron of our charity.

“He and his wife have already been a great help to us, but by being our patron Bob will help us to keep raising awareness of the importance of hen welfare and making a difference to the lives of hundreds of thousands of chickens.

“Bob already has a huge fan base, and rightly so, but now he also has our flock of human supporters and their feathered friends who are all thrilled he’s become part of the BHWT.”

Alongside it’s rehoming work, the charity is also dedicated to educating consumers to help them make informed decisions when shopping. The BHWT also works with DEFRA and other agencies to develop best practices in commercial and hobbyist hen-keeping and supports veterinary and research programmes to improve pet hen health.

Bob Mortimer, comedian and new patron of the charity, says, “We have had hens ourselves when our boys were younger, and it was the first time I ever tasted a ‘real’ egg.

“Since then, I’ve learned more about the difference between free range and organic eggs, and I think the BHWT is a really worthwhile endeavour, so to be able to help them is a very nice thing.

“Helping out with the Christmas cards has been great and if me being a patron leads to someone somewhere giving some hens a good home, then I’m all for it.”

• The British Hen Welfare Trust was established in 2005 by Jane Howorth and is Britain’s first registered charity concerned with rehoming laying hens while improving hen welfare across commercial and domestic sectors.

• Jane Howorth was awarded an MBE in the 2016 New Year’s Honours list.

• In the UK there are approximately 16 million hens kept in colony cages. The BHWT has so far found retirement homes as pets for over 847,000 ex-commercial hens, all of which were destined for slaughter.

• The British Hen Welfare Trust works closely with DEFRA and other agencies to develop practices and protocols to improve the lives of both commercially-farmed and hobbyist pet hens.