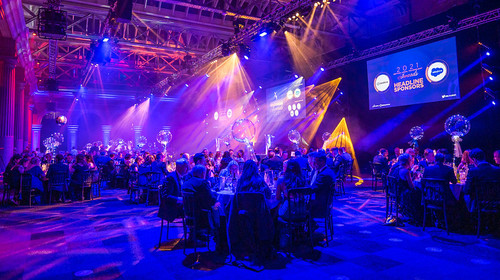 A ‘divorce’ legal services solution, global law firms, legal security and AI solutions vendors were among the winners of the British Legal Technology Awards 2021 (BTLA), organised by Netlaw Media. The winners of these prestigious awards were announced on Thursday 11 November 2021 at a glittering ceremony, held at The Old Billingsgate, London. The event, hosted by Jason Bradbury, was attended by 300 guests, dignitaries and shortlisted candidates from the world of legal IT and security.

The announcement of the BLTA winners followed a rigorous vetting process, undertaken over several months, overseen by a 21-strong independent expert judging panel.
Three groups of award winners were announced at The Old Billingsgate ceremony – one for UK and EU law firms, barristers chambers and in-house legal teams, and the other for legal IT vendors and consultants. The award winners were as follows:

Categories for Legal IT Suppliers
Legal AI Supplier of the Year
Winner: ContractPodAI

IT Product or Service of the Year
Winner: InfoTrack

IT Security Provider of the Year
Winner: Guardicore

Supplier of the Year
Winner: InfoTrack


The BLTA judging panel also bestowed a lifetime achievement award on Stuart Barr, in recognition of the dramatic career changes faced over the past 18 months, and the contributions he has made through the respective products he has previously pioneered.

Closing the event’s proceedings, Jacqueline de Rojas, president of techUK, said the BLTA ceremony “is a fantastic opportunity to celebrate the incredible impact made to the agility and transition of firms through the last 12 months of industry rebalancing and adapting to the changing priorities. The UK legal sector over the past year has shined a light on business culture, team spirit and strength.” de Rojas continues “I believe it is essential to continue to acknowledge the innovation and tech that underpins the service and teams that have been awarded. But let’s not forget our future generation, for these will be the individuals carving a new path for the profession and delivering new ways to protect and support their clients in unparalleled times.”

Ms de Rojas’ comments were echoed by Netlaw Media UK and EMEA Managing Director Frances Armstrong, whose company organised the BLTAs. “The British Legal Technology Awards 2021 continues to exist to recognize the sectors dedication, visionary leadership and technological innovation. Netlaw Media has been working closely with the Judges to ensure this remains a focused accolade in the legal technology sector, encompasses true integrity and impartiality and is an evening that continues to honour and celebrate the communities’ hard work”.

About ‘The British Legal Technology Awards 2021’:

Nominations for the British Legal Technology Awards 2021 opened in February this year. A shortlist of finalists was announced during a social media campaign in September. The 2021 Awards were a complete sell out with additional tables added to meet demand and will return to the legal events calendar in November 2022.
The 21-strong BLTA judging panel was chaired by techUK president Jacqueline de Rojas. The panel also included IT heads from several international law firms, professors and consultants who specialise in the legal sector, and representatives from the legal IT vendor and consultancy community.

The British Legal Technology Awards ceremony was the 28th face to face event organised by Netlaw Media since the company was formed in 2008.