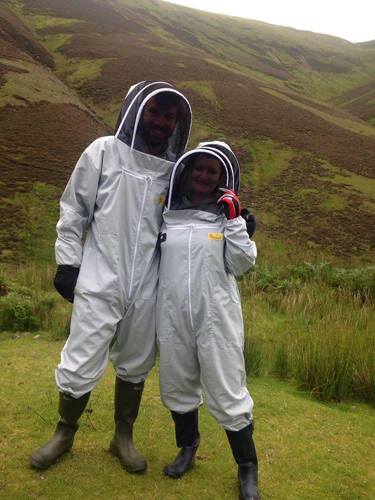 The Scottish Bee Company, a family-owned brand that prides itself on producing uniquely flavourful honey ethically and sustainably, has renewed its pledge to increase the local bee population by 20 percent over the next three years, and to raise awareness of what the British public can do to help pollinators.

Co-founder, Iain Millar, renewed the pledge during a panel discussion at the 2021 Brodies Food and Drink Conference, which was focused on the importance of sustainability in the food industry, why pollinators are critical to daily life, and advice for businesses keen to pursue more sustainable goals.

“I’m often asked why we founded The Scottish Bee Company, and why we’re so passionate about bees and other pollinators. I respond with my own questions. Did you have a cup of coffee this morning, or grab an apple for a snack? If so, you can thank pollinating insects, which are responsible for roughly one third of the foods that we eat,” explains Iain.

“They are also behind most wildflowers that you have ever admired, with 80 percent of Europe’s wildflowers being insect pollinated. A continuing decline in pollinators would have an enormous impact on biodiversity, and ultimately our day to day life. That is what led to the founding of our business, and our commitment to bolstering pollinator populations.”

So far, The Scottish Bee Company has increased the bee population in Scotland by 23 million, working in collaboration with artisan bee farmers. They have also started Scotland's first bee farming apprenticeship and a charity, RePollinate, which aims to build wildflower spaces for honey bees and other pollinators, and provide education and awareness programmes.

“Education and increasing awareness is a significant focus at the moment,” says Iain. “One of our missions is to shout as much as we can about the qualities of Scottish honey. More demand and production of honey means we can pour even more investment back into the work that we’re doing to support pollinators, whether that’s through breeding or helping beekeepers deal with the challenges and unpredictability of their own businesses.

“Scottish heather honey is up there with Manuka as far as its health attributes go, but it doesn’t have the same profile yet. We have done some initial work with researchers from Fera Science Limited, which revealed that heather honey contains significantly higher levels of the essential micronutrient, manganese, than other honeys. We will continue to invest in that scientific research, as the results will help us tell an important story around how Scottish honey can actually contribute to your wellbeing, along with tasting really good.

"The Manuka companies in New Zealand have done an excellent job over the past thirty years, which has been of huge value to their bees. Our dream is to see British bees enjoying the same benefits from an increase customer demand, and awareness of how to support honeybees in a sustainable way.”

Co-founders, Iain and Suzie Millar, launched The Scottish Bee Company in 2017 because they were saddened at the decline in bee numbers. Their aim was to increase hive numbers in Scotland by giving hives to artisan bee farmers and selling honey on their behalf.

Since then, their honey products have won multiple awards, including a platinum award at the London International Honey Awards, and their Scottish Heather Honey has become the first ever food product in the UK to be awarded the new British Standards Institution (BSI) Kitemark for Food Assurance. The Scottish Bee Company products are now stocked in retailers across the UK, including Selfridges.

Many of their plans had to be put on hold due to Covid-19. Now, with restrictions easing, the couple are renewing their efforts, with a focus on:

- Building spaces for all pollinators to thrive (honeybees and the many other species of pollinating insect), both by working with other companies/organisations and buying their own land.
- Educating the public on the environmental benefits of all types of pollinators. Increasing understanding of why they are important, and how we can all help protect them.
- Engaging the government to help develop strategies to protect the UK’s wildlife, and working with commercial bee-farming businesses and trade associations to increase the number of beekeepers.
- Supporting scientific research into the protection of the environment, the health properties of honey.

Customers can further support the cause by buying a jar of honey from The Scottish Bee Company – with 10p from every unit sold going towards RePollinate’s charitable activity. All fully packaged gift options come with a pack of wildflower seeds.

There are also several sponsorship options available, with pollinator-lovers able to sponsor a queen bee, a hive, or a brood box. A percentage of the cost goes to RePollinate to help the UK’s bee population, and the recipient also receives a gift box. Those sponsoring a hive are even recognised with a plaque with their name on it specially made and attached onto their hive, along with updates and photos throughout the year.

For more information on The Scottish Bee Company, visit scottishbeecompany.co.uk. For more details on their charitable work, visit repollinate.org.uk.

The love of bees. The Scottish Bee Company was founded in 2017, when Iain and Suzie Millar were inspired to do something about the plight facing bees. They adopted some bees, hired a team of expert bee farmers, and brought them together in the heather covered hills of Scotland to produce uniquely flavourful honeys that reflect the region’s unspoiled wilderness.

Creating a buzz. The Scottish Bee Company is almost five years old, so still a young brand, but it has already made waves. In 2020, the brand’s Scottish Heather Honey became the first food in the UK to be awarded the new BSI Kitemark for Food Assurance (for quality and safety). Scientists have also labelled it as a superfood after analysis revealed that it contains up to 10 times more of the essential micronutrient manganese compared to global rivals.

Award-winning. The Scottish Heather Honey has won multiple awards, including a Great Taste Award and winner of the highest award at the London Honey Awards.

From small beginnings. The Scottish Bee Company now has 500 hives dotted across the Scottish countryside, equating to around 25 million bees at the height of summer.

Fully trackable – from the hive to the jar. Unlike many other honeys, every product from The Scottish Bee Company can be tracked back to the brand’s hives in the Lothians, Dumfriesshire, Fife, and Aberdeenshire, meaning that customers can have confidence in the providence, authenticity and integrity of the honey that they’re buying.

A taste of place. Iain and Suzie believe that honey can be as complex and varied as wine, coffee, and olive oil, and tell you just as much about where it was produced. Suzie has recently achieved certified Honey Sommelier status. This is official recognition of her honey knowledge and experienced palate, which can identify a wide range of different flavours, aromas, and terroir.

International presence. The Scottish Bee Company currently exports to Europe, North America and the Far East, with plans to expand this further over the coming years.

Making strides for positive change. Social responsibility and environmental sustainability is central to everything that The Scottish Bee Company does. Iain and Suzie are working with local bee farmers to grow the industry in Scotland, and to provide opportunities for those wanting to forge a career in bee-keeping.

Iain and Suzie have also started a sister charity - repollinate.org.uk that aims to protect all types of pollinators through wildflowers spaces and education programmes. 10p from every jar of honey purchased is donated to Repollinate. Customers can also sponsor a bee, hive or brood box, which comes with different gifts and information packs, and also includes a donation to Repollinate.