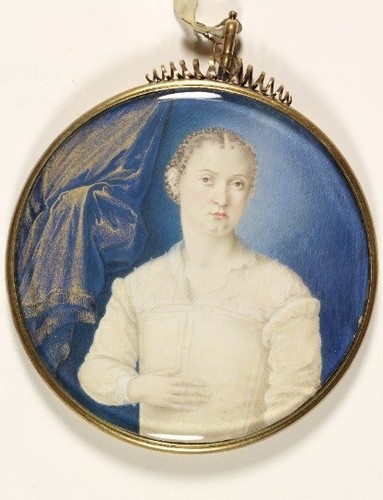 Sofia Mitsola, returns to The Harley Gallery on the Welbeck Estate having previously shown with The Jerwood Collection.

Inspired by the historic miniatures in The Portland Collection; one of the three outstanding private holdings of miniatures in the country, ranking with those owned by The Queen and the Duke of Buccleuch. By using traditional techniques and materials, Mitsola places the characters from her mythology within the traditions of the past.

Exhibited for the first time, Mitsola’s miniatures are shown in conversation with 33 pieces from The Portland Collection, to explore themes that relate to both history and myth. Through a display that is suggestive of a family tree, the artist has imagined a genealogy of her invented characters. These, are painted on vellum, using layers of watercolour, which allow the colours and forms to emerge until the characters are revealed. Mitsola then adorns her subjects, deciding how they would have chosen to be presented through their pose, dress and expression. Set in gold and vividly coloured backgrounds, the characters become more than portraits – they are icons and amulets of protection.

One of the key miniatures, formerly thought to have been of Bianca Capello, Grand Duchess of Tuscany by an unknown artist, has been reattributed and is now thought to be Eleonara di Toledo by Giulio Clovio,c.1551. This piece, one of only two surviving portraits by this celebrated artist was once in the collection of Francesco I de Medici. (This reattribution was identified by fine art specialist Robert B. Simon and Dr. Lauren Batt of The Portland Collection.)
The theme of the depiction of powerful women using jewels and fine adornment is continued with Nicholas Hilliard’s portrait of Queen Elizabeth I. He was a contemporary of Giulio Clovio. As in his Pelican and Phoenix portraits of the Queen, the artist depicts the sitter’s costume and jewels in exquisite detail. In all three miniatures by Hilliard, Clovio and Mitsola, the viewer is drawn to the sitters’ alluring yet imperious eyes.

Several of the pieces chosen by the artist have connections to French history, one being a portrait of the Empress Joséphine, Napoleon I’s first wife, wearing an emerald parure. Mitsola often refers to regal portraits and adorns her characters with lavish jewels to attract the viewer’s gaze.

Other miniatures include the Joseph Duplessis copy of Queen Marie Antoinette from c.1771, Louis XIV and his Chief Minister, Cardinal Mazarin and Henrietta, Duchesse D’Orleans. Andrew Plimer’s portrait of Henrietta Scott, Marchioness of Titchfield, emphasises his sitter’s beauty, as she stares out to the viewer.
This series of works by Mitsola have a similar defiant stance, as seen in some of the historic miniatures.

Lisa Gee, Director of The Harley Gallery, commenting on the exhibition: “We are thrilled to have Sofia Mitsola’s work back in The Harley Gallery, particularly as the miniatures she chose illustrate how the juxtaposition of historic works and contemporary pieces complement and enhance each other.”

The Harley Gallery
Situated on the historic Welbeck Estate in North Nottinghamshire, the seat of the Dukes of Portland, the award-winning Harley Gallery shows contemporary exhibitions of works by leading artists.
These art spaces are supported by the gallery shop specialising in contemporary craft from leading names and emerging makers, including some of the 21 artists within Harley Studios.

The gallery regularly hosts events including Harley Open Studios, Makers Club and a monthly programme of talks. Educational activities for children are arranged throughout the year.

The Portland Collection Museum
Works selected from Welbeck Abbey’s historic collection built up over 400 years by the Dukes of Portland are displayed in revolving exhibitions alongside The Harley Gallery. A major art collection of immense variety and scale, it includes oil paintings, tapestries, miniatures, porcelain, silver and jewels.
The Portland Collection opened in 2016 and was designed by the London based practice Hugh Broughton Architects on the site of the 1,270 foot long Tan Gallop. This was one of the ambitious buildings created by the Victorian 5th Duke of Portland, which also included the second largest indoor riding school at the time of building, after the Tsar’s in the Kremlin.

Both galleries are open Tuesday-Sunday (Closed Mondays) Free admission and free parking.
Please check the website for opening hours before planning your visit.

Welbeck Abbey
From its foundations as a monastery of the Premonstratensian order in 1153, Welbeck Abbey was acquired in 1607 by Sir Charles Cavendish, the youngest son of Bess of Hardwick, one of the most powerful women in the Elizabethan period. Since then, Welbeck has been owned by generations of the same family. The Abbey has evolved through the centuries, reflecting the political, military and social status of the family from a Cavalier residence, to an Edwardian pleasure palace. The house was a hospital during World War One, and later, an army training college until 2005.

The Abbey sits at the heart of a 15,000 acre estate on the borders of Sherwood Forest. The Welbeck Estate is undergoing a 20 year development project, and significant historical buildings in the estate village have been repurposed and now house the School of Artisan Food, Welbeck Abbey Brewery, Welbeck Bakehouse and the Dukeries Garden Centre. These sustainable businesses supply goods to the Harley Café and the Welbeck Farm Shop.