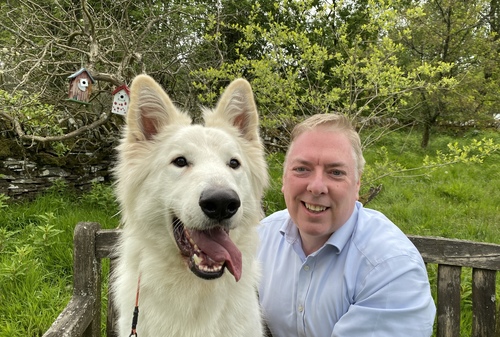 A dog lover is all set for global sales after innovating a range of sustainable dog poo bags that dissolve in water.

What should have been an enjoyable stroll turned into a rubbish-strewn obstacle course as they visited Loch Long in Argyll and Bute.

“There was this awful scene of plastic bags and debris all along the shoreline,” said George, a former payments network director who quit his job to invest his time in his ambitious new venture Project Harmless https://projectharmless.com/ in lockdown last year.

“It shocked me. It underlined just how much plastic is in our water. In fact, ten per cent of general waste plastic worldwide ends up in rivers and oceans,” said George.

So rather than simply complaining or forgetting about it, George set up Project Harmless to cut down on the use of harmful plastic and improve the planet “one bag at a time.”

He ploughed on with product development amid subsequent lockdowns and his business began to grow through word of mouth.

Just 12 months later, George’s poo bags are available to UK dog lovers and are all set for the worldwide market. Interest has come from Ireland, Belgium, and America, with a subscription box idea gaining traction.

George, of Edinburgh added: “Dog owners are a hugely responsible group of people and they recognise this is a huge problem and are keen to help.

“I called my product poop rather than poo bags as this is more in line with international branding.

“I am very encouraged by the support and opportunities so far. There are around 13 million dogs in the UK alone. Each one of those dogs does its business about three times a day, and around 70% of owners use dog mess bags. So that’s more than 25 million bags being used, every single day.

“Work that out over a year and it’s nearly 10 billion bags,” says George. “If ten per cent go into our water, that’s a billion. And most of those will be around for 500 years. As they degrade, they release poisonous microplastics and toxins which are bad for wildlife. Fish eat them and they go into the human food chain.”

Project Harmless came up with a new approach after they found research pointing to current ‘sustainable’ solutions not measuring up to anticipated results.

“We believe some biodegradable and plant-based compostable bags, made using corn-starch, are better than the eco-disaster of degradable bags, but they are still not ideal,” said George.

George’s partner, Ka Ho, had previously researched materials used in the making of medical pills which dissolve as they are digested.

"Unlike any biodegradable or plant-based compostable bags made using corn-starch, or single-use plastic, our bags are water-reactive, and they dissolve in the presence of water,” says George. “If one of our poop bags gets into landfill, it will disintegrate very quickly. If it gets into the open environment, or into rivers or oceans, it will disintegrate rapidly. So, it’s no threat to fish or wildlife.

“Protecting millions of marine animals who die from eating harmful plastics is a massive consideration.

“It is also made of harmless non-toxic and microplastic free material.

"That's why I call it probably the most harmless poop bag on the planet.

“If dog owners simply replace their existing harmful dog waste bags for Harmless Poop Bags, they can make the planet a better place one bag at a time.”

One-hundred Harmless Poop Bags cost £15, which George says compares well against cheaper varieties when you consider the quality and positive effect on the environment. “In fact our Harmless Poop Bag Subscription plan works at just £2.60 a week for one dog, that's less than the price of a coffee to make the world a better place”.

For more information about Harmless Poop Bags and how they are protecting the environment visit: https://projectharmless.com/