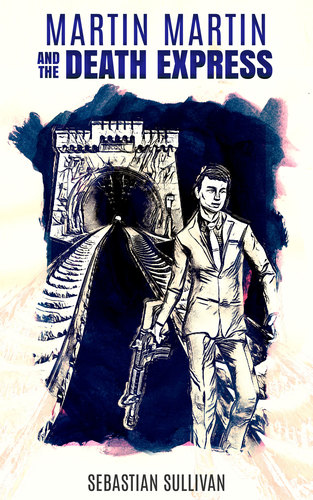 Martin Martin and the Death Express is a new satirical action thriller by Sebastian Sullivan.

The book’s hero is Martin Martin, a mild-mannered young train manager who, after accidentally killing a passenger, finds himself mixed up in a Faustian pact with railway baron Silas March and his right-hand man, the murderous Mr Draconian. Draconian runs the Special Collections Unit, a paramilitary division of ultra-violent former ticket inspectors.

March has realised that he cannot afford his franchise repayments to the government so has resorted to killing off fare evaders and undesirable passengers, then funnelling their falsified wills and estates into a bogus children’s charity.

Along the way, Martin blackmails a cabinet minister, drowns a gangster in a train toilet, and is nearly thrown off a roof by a fading reality TV star. The book climaxes with our hero triggering an international incident, putting him firmly on the radar of espionage agencies worldwide.

In a nation where Booker Prize judges pour scorn on working class readers such as dinner ladies and steelworkers, they might faint when they discover the author, Sebastian Sullivan, is a train guard.

Sebastian has spent close to twenty years working in a variety of roles on Britain’s railways. Regular passengers on the Midland Mainline M1 corridor route between Sheffield and London St Pancras knew him affectionately as “Sebastian the train manager”, a reputation built on his witty onboard announcements warning passengers about “nefarious and downright shady behaviour” and advising them not to go to work but to the pub instead. This gave him something of a cult following on social media.

“The book is a love letter to staying up late as a kid with my older siblings and watching things on TV I shouldn’t have,” says the author from his Nottingham home.

“It nods to the world of Ian Fleming and John Le Carre, but it also has a violent satirical element reminiscent of writers like Chuck Palahniuk and Irvine Welsh. However, it’s forged in the great tradition of English satirists like Douglas Adams, Jasper Fforde and Tom Sharpe. The character of Martin Martin is that of a wide-eyed innocent surrounded by corruption and turpitude on all sides. I was inspired by the central characters in Ealing comedies like I’m Alright Jack and The Man in the White Suit as well as Evelyn Waugh’s Paul Pennyfeather. To me there is something very English about the book. In addition, with the current cost of living crisis and currency crashes upon us, the book is very much about how we live now and our government’s paralysis to protect us from predatory capitalism.”