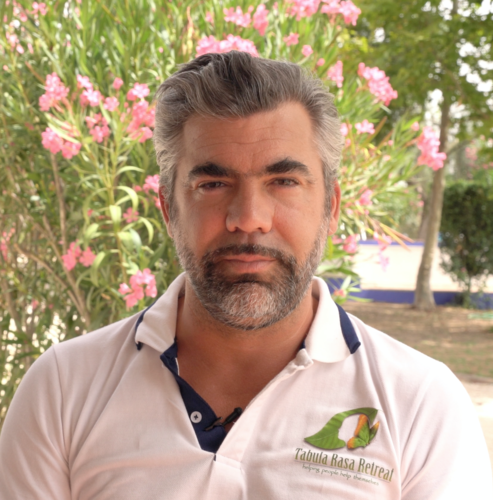 Seven years ago, Alvaro De Ferranti, CEO & co-founder of Tabula Rasa Retreat in Portugal was a highly functioning addict, spending his nights sitting in his potting shed, aptly named ’The Sugar Hut’ after The Only Way is Essex, getting high on crack cocaine (and spending 50k plus per annum on his habit). At the same time, he managed to run three successful London based interiors and architectural businesses and his customers included oligarchs, rock royalty and film stars, these clients still seek his experience and expertise today.

The 52-year-old, from the privileged middle-class De Ferranti family, was born in London and moved to Portugal in 1973. The family home on a hill had splendid views over Lisbon towards the Tagus River and ocean. It was a time of civil unrest in Portugal (pre-1974 revolution) and Alvaro had many friends across different classes, from his local neighbourhood to the shanty towns and ghettos. Alvaro describes his early childhood as ‘rich and colourful’, however he also recalls his first experiences of substance misuse at a very young age breaking into the first aid cabinet swigging from medicine bottles.

Like some of his siblings, Alvaro was sent to boarding school age 10. All spread out, the brothers and sisters became disconnected, and feelings of abandonment began to set in. He started to play truant, get into fights, and was held back a year for failing exams. He was embarrassed and developed feelings of low esteem. Age 13 he was moved back to Portugal and that’s when he started meddling with substances in the ghettos and using drugs at school. The ghettos had changed significantly, rather than the friendships based on the old days, they were rife with drugs, gun, and knife crime. Despite the dangers Alvaro would frequent the alleyways and shacks. At 13 he had already dabbled with crack, revisiting his drug of choice at 30 when he became well and truly hooked ‘It was as if I had come home, a feeling of, where have you been all my life?’. He smoked weed consistently from the age of 14 until his late 20’s, drank alcohol from 13, regularly binging until the age of 40 and had a phase of smoking heroin in his late teens.

Coming from the De Ferranti family also had its pressures for Alvaro as coming from that lineage he felt that he could never be good enough in living up to the name. (His family lineage goes back to the famous engineer and entrepreneur Sebastian Ziani de Ferranti of the Ferranti Electronics Empire with the building of Deptford power station which lit up part of London with electricity - Deptford was first truly modern power station).

At one point in his addiction, he felt like his heart might explode and that he was having a heart attack. He’d hit rock bottom, his body was breaking down, his marriage was on a fine thread and his businesses weren’t getting the attention they needed, Alvaro knew he’d be dead if he carried on.

Today Alvaro is in recovery, and he puts it down to his experience with ibogaine, a oneirogen substance, which puts the user into a dream like state. This substance comes from the Tabernanthe Iboga shrub. Historically it has been used in healing ceremonies and initiation rituals in the Bwiti religion in West Africa. Jade, Alvaro’s wife had heard about the treatment in a TED Talk, a Joe Rogan podcast (and other sources) and it wasn’t difficult for him to be persuaded to travel to Sara Glatt’s clinic in Amsterdam for the treatment. He had previously tried hypnosis and managed to get clean in a residential rehab treatment programme the year before. After residential treatment he was advised to do 90 meetings in 90 days which he did with obsessive tenacity, however he found this very time heavy and struggled to relate to others in the room and unable to ask for help feeling that he wasn’t quite ready. He credits those experiences as part of his journey, however, the ibogaine treatment was the missing piece of the puzzle.

Not a pleasant experience but a life saver for Alvaro, his ‘trip’ was ‘horrible and disturbing’ with images of Disney characters bludgeoning each other, witnessing his own death as an onlooker, and living in a third world sewage system.

In layman’s terms, ibogaine rapidly and painlessly interrupts addictions, relieves withdrawal symptoms, and brings patients back to their pre-addictive’s state, also known as a novice state.

Such was the transformation for Alvaro, that in 2018, he opened the Tabula Rasa (Latin: ‘clean slate’) Retreat in rural Portugal which he runs with his wife and co-Founder Jade, who is a qualified EFT and ABNLP/NLP practitioner. Tabula Rasa Retreat offers a resort style setting in 9 hectares of nature providing comfort and safety. All clients undergo rigorous medical and psychological screening before, during and post treatment and are medically monitored by ACLS trained staff throughout the process.

Other than the ibogaine treatment, what makes Tabula Rasa Retreat stand out is Alvaro’s relentless mission to inspire his clients, always on the search for the holy grail of recovery. He has introduced programmes influenced by many household names to include:

Breath work and cold exposure therapy by Wim Hof and various nuances of these as adopted by Troy Casey (aka The Certified Health Nut) as well as his 9 Pillars of wellness; The Barefoot Sensei (aka Mick Dodge) for his love of exercising and being in nature; Stanislav Grof for Holotropic Breathwork; Tommy Rosen for introducing Recovery 2.0, combining the 12 Steps and Kundalini Yoga (as per the teachings of Yogi Bhajan) and the importance of community; Lakota elders and their approach to natural medicine through song, energy and touch and Temazcal’s (sweat lodges); Sadhguru and Osho for their wonderful quotes and guidance; Louise Hay for inspiring us all… and so many more.

Alvaro owes much of the quality of his work and knowledge to his ‘mentor’ and ibogaine activist, the late Robert Rand (also known as Bob Sisko). Importantly, Bob was one of the pioneers of the early ibogaine movement in the 1970s and continued to spread the word up to his deathbed. He recently passed away at the age of 75 after a battle with liver cancer.

Alvaro now has a very happy household and has made a huge effort to engage with his family. These relationships are based on honesty and trust, checking in with each other most mornings as a daily practice, talking about how they are feeling and their day ahead, making sure to check out in the evening to ensure they all go to bed peacefully, with a clean conscience.

Alvaro and his team at Tabula Rasa Retreat have treated more than 230 clients from across the globe including the UK, USA, Scandinavia, Ukraine, Russia, Iceland, Spain, France, Israel, the Far East, and Australia. Clients include young addicts whose families have pulled them off the streets, CEOs/business owners, oligarchs, people in the creative industries, not just addicts but also people with mental health issues, such as PTSD, ADHD, Bi-Polar, anxiety, eating disorders, and more recently anhedonia.
The renowned addiction expert, speaker author Dr. Gabor Maté has referred clients to the programme as have many pioneers in the field of ibogaine, addiction and mental health.