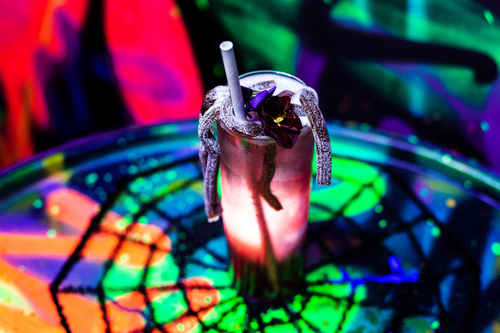 Retro arcade bar, NQ64 is playing host to nights of gaming horrors and cocktail treats in three of its venues over Halloween, appearing in Manchester, Newcastle and Liverpool.


All three Halloween parties are free to attend, with student and industry discounts on offer, and will be filled with cocktails inspired by Stranger Things, retro games and prizes for best costumes.


Across all NQ64 venues, tasty treats with a Stranger Things twist will be served as the retro arcade bar launch their limited edition cocktails: Corroded Coffin and Vecna’s Twist.


In addition to NQ64’s Halloween-inspired cocktails, the arcade bar will also be serving up cocktails from its brand-new retro game inspired menu, launched earlier this month, which includes their very first non-alcoholic additions. The new menu was created and developed by bar tenders from each of NQ64’s venues across the UK, via an internal competition to get everyone involved with developing the menu across their nine venues in the UK.

James Taylor, NQ64 Drinks Development and Training Manager, told us: “At NQ64 we are always looking for inspiration when it comes to our venues, whether this is through finding new arcade games or developing our bar menus. With drinks being such a huge part of the NQ64 experience, we always like to keep the menu fun and fresh by adding exciting twists to game-inspired cocktails”.


Editors Notes: Born in Manchester in 2019, NQ64 is the arcade bar concept which provides neon-splattered drinking dens, where guests can enjoy game-themed cocktails and craft beers while playing a range of retro arcade machines, pinball and classic consoles. The brand is on an exciting growth mission to bring drinks and button bashing to cities across the UK. Purveyors of retro gaming, NQ64 brings together the nostalgic video games of your childhood with classic arcades and consoles to boot, all sourced from across the globe. Why not bring back your best Hadouken moves and take on your mates with the likes of Street Fighter, Tekken or Mortal Kombat. Or have a go on their classic consoles including SNES, MegaDrive, Gamecube and PlayStation? There’s also a heap of fan favourites to get stuck into including Pac-Man, Mario Kart, Guitar Hero, Time Crisis and Point Blank.

Cocktails inspired by the retro arcade games, which will be on offer at each of the venues include:

• Mr Stay Puft: A Marshmallow espresso Martini, with Vodka, Espresso, Marshmallow and Chocolate [Based on the Ghostbusters character]

• Mega Daisy: A Gin spritz with Aperol, Triple Sec, Elderflower, Lychee and Prosecco [Based on Daisy from the Mario franchise]

• Final Fantarita: A Sour cherry margarita with Tequila, Sour Cherry and topped with Fanta [Based on Final Fantasy game]

• Lake Springfield: A Sour Apple Whiskey drink with JD Apple, Midori, Toxic Waste Cordial and Apple [Based on The Simpsons]