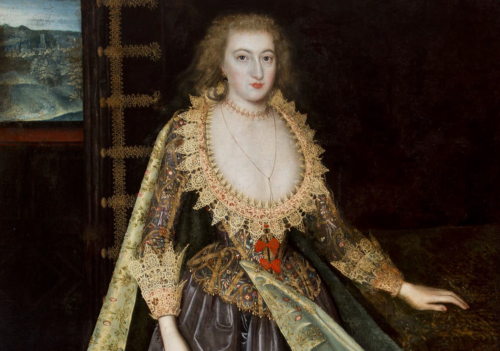 Unseen Treasures of The Portland Collection, at the Harley Foundation, North Nottinghamshire, offers a new, revealing look at this world-class art collection.

The Portland Collection, built up over 400 years by a single aristocratic family, is vast
and varied. Exhibitions in its dedicated museum change every three years.

For this display, opening 25th March 2023, visitors will enter a museum filled to the brim with fascinating art and objects, a giant cabinet of curiosities. There will be silver and tapestry, paintings and jewels; art that has come home after a long loan to a prestigious national gallery, and stunning star items that visitors know and love – such as Michelangelo’s ‘Madonna of Silence’ or the pearl earring worn by Charles I
at his execution.

A highlight of the display is a Picture Gallery, stacked with Tudor and Jacobean portraits - many of which have never been seen publicly before.

Lisa Gee, Director of The Harley Foundation, explains:
“It is said that a picture paints a thousand words, so what do these portraits tell us? Historic portraits were almost always flattering, filtered images which are like the social media of their day. But behind the gleaming fabrics and jewels were fully rounded individuals. Despite their starched clothing they were as human as we are.”

Highlights from Unseen Treasures of The Portland Collection include:

- Lady Margaret Stuart, Countess of Nottingham, by Paul van Somer, c.1620. A rarely shown portrait which shows the Countess wearing an elaborate dress with an improbably plunging neckline. This was in the style of Queen Anne – it revealed her power and status, as well as her decolletage.

- Map cabinet, inlaid with ebony and ivory, c. 1625.
Thought to be one of just six made, and the only one in the UK. This intricately inlaid cabinet shows an early map of the world, taken from Ortelius’ 1570 Theatrum Orbis Terrarum, widely considered to be the first modern atlas.

- Silver wine fountains, by Adam Loofs, c. 1688.
These monumental display pieces were commissioned for William of Orange, later King of England, and gifted to Hans Willem Bentinck, who was to become the 1st Earl of Portland. Old silver such as this is rare - most large pieces were melted down to make new, more fashionable showstoppers. This is believed to be the only surviving pair and one of the highlights of the spectacular silver in The Portland Collection.

- The Horsemanship Tapestries, by Wauters after Diepenbeke, 1660. William Cavendish, ancestor to the Dukes of Portland, was one of the great horsemen of his day. He literally wrote the book on horsemanship, which led to the modern art of dressage (a copy of ‘The Horsemanship Book’ is also on display). These tapestries were woven from the Abraham van Diepenbeke illustrations in his book, and we believe that only eight sets, each of five designs, were made. You can see three of these huge textiles in the display (the others can be seen at Welbeck Abbey, on tours of the State Rooms, which will run during March and April).

- Bess of Hardwick, in the style of Rowland Lockey, c. 1587. The Countess of Shrewsbury, aka Bess of Hardwick, was the mother of the Cavendish dynasty, ancestor of the Portland family, and an icon of Tudor England. This is believed to be the primary copy of her most famous portrait.

The Harley Foundation has invited different experts to explore Unseen Treasures and create gallery trails. Pick up a leaflet and have Dr Karen Hearn (Tate, UCL) or Hannah Obee (Wallace Collection, Chatsworth, Harewood House) take you on a journey. You might learn about celebrity in Tutor Britain, the surprising story of a conjurer turned calligrapher who made a self portrait with microscopic text, or how embroidery could save your life – and earn you an Earldom.

Unseen Treasures of The Portland Collection, opens at the Harley Foundation, North Nottinghamshire, on 25th March 2023. It will be open 6 days a week and is free to enter.

- Unseen Treasures of The Portland Collection will open at The Harley Foundation on 25th March, 2023. It will be on show for 3 years.

- The exhibition will include works of art that have not been exhibited publicly
before, accompanied by other important pieces from this world class art collection.

- The Harley Foundation, a cultural centre of excellence in the Midlands, is on the historic Welbeck estate in North Nottinghamshire, 15 minutes from the A1
and M1.

- Entry to the museum is free. There is also free parking on site.

- Tours of the State Rooms at Welbeck Abbey are running between 25th March and 6th April. Prebooking essential. See www.harleygallery.co.uk.

- For visitors wishing to stay at Welbeck to visit Unseen Treasures of The Portland Collection, please go to https://www.harleygallery.co.uk/visitus/things-to-do/ for information on available bed and breakfast and cottages.

The Harley Foundation is a charitable trust which supports the visual arts and crafts.

It has created award-winning visitor attractions, a community of artist’s studios, and a vibrant event
and education programme on the historic Welbeck estate.
Visitor attractions include the award-winning Harley Gallery, which shows contemporary exhibitions
and The Portland Collection, a museum showing the art collection created by the Dukes of Portland
and their families over 400 years.

The art spaces are accompanied by the gallery shop specialising in contemporary craft from leading
names and emerging makers. Visitors can also enjoy an Art Trail through the Welbeck countryside,
family activities, and an events programme that includes Harley Open Studios, Makers Club and a
monthly programme of talks.

The Welbeck Estate
Nestled in the heart of Sherwood Forest in Nottinghamshire, Welbeck extends to some 15,000 acres, straddling the borders of Nottinghamshire and Derbyshire. Welbeck Abbey, within the heart of the estate, was initially founded as a monastery in 1153. After the dissolution of the monasteries, the Abbey was bought by Sir Charles Cavendish, the youngest son of Bess of Hardwick, one of the most powerful women in the Elizabethan period. Since then, Welbeck has been owned by generations of the same family. The Abbey has evolved through the centuries, reflecting the political, military and social status of the family from a Cavalier residence, to an Edwardian pleasure palace. The house was a hospital during World
War One, and later, an army training college until 2005. Welbeck continues to be a working estate. It contains a Grade 2 registered historic park designed in
1748, ancient woodlands and forestry, lakes, farmland and grazing and a deer park. It also has some
of the country’s most important rural heritage buildings. While the estate looks much as it did in the 19th century, behind the doors of its extraordinary
heritage buildings are a community of artisan food producers, artists, makers and businesses.