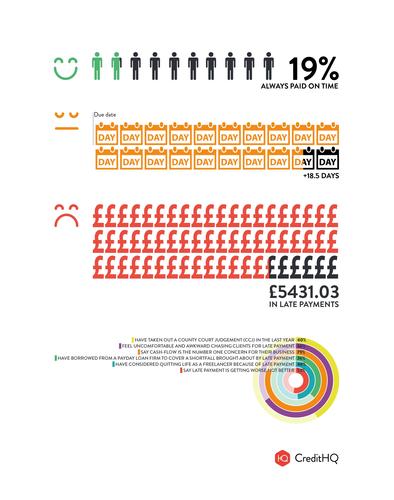 Every freelancer knows that late invoice payment is one of the biggest frustrations, impacting cash-flow and causing much stress

UK freelancers owed an average of £5431.03 in late payments, with 36% borrowing from a payday loan firm to cover a shortfall

02 June 2016 – UK freelancers are increasingly struggling with late invoice payments, with around half admitting they have considered quitting life as a freelancer because of worries over continued late payment, and 46% stressing about having enough cash to live on.

The new research from fintech start-up Ormsby Street, also revealed that one in 10 freelancers have faced difficulties paying their mortgage or rent because of late invoice payment, and many have turned to family (37%) or payday loans companies (36%) to cover a shortfall brought about by late payment.

“Every freelancer knows that late invoice payment is one of the biggest frustrations, impacting cash-flow and causing much stress, from paying the mortgage to having enough money to live on,” said Martin Campbell, Managing Director, Ormsby Street. “For a freelancer to be owed more than £5,000 is clearly unacceptable and threatens the emerging freelance economy in the UK, which brings flexibility and work / life balance to so many.”

The Office for National Statistics revealed in 2015 that 4.55 million Britons are now their own boss and research by the Association of Independent Professionals and the Self-Employed (IPSE) found three in five businesses agree that it would be difficult to operate without hiring freelancers. The Ormsby Street survey of 1,002 freelancers and sole-traders, revealed that 40% of respondents have taken out a County Court Judgement (CCJ) in the last year to chase a bad debt, and more than half say that late invoice payment is getting worse not better.

It remains a problem for many freelancers when it comes to chasing clients over late payment, partly because they do not have the time to spare, but also because of fears this might impact future work with that company. 57% of respondents say they worry that if they chase for payment that client might not use their services again, while two-thirds say they feel uncomfortable and awkward chasing clients for late payment.

“Why should a freelancer waste their own billable hours chasing payment for work that has been successfully completed and is already due for payment,” continued Martin Campbell. “If customers are not willing to pay within the agreed terms then it’s time for freelancers to become more informed over whom they work with, and either ask for payment upfront or even choose to not work with company.”

Ormsby Street is the company behind free credit-checking tool, CreditHQ, an online tool that allows a small business to check the credit status, payment performance and general financial health of any customer or partner.

With 49% of freelancers having had to turn down a contract because of concerns over a client's ability / willingness to pay on time, Ormsby Street is launching a freelance version of CreditHQ, allowing freelancers to obtain financial insight into every company they trade with.

“Freelancing has grown in popularity because of the choice and flexibility it gives people over their career, but its success relies on the prompt payment of invoices, which is not happening enough,” concluded Martin Campbell. “Credit-checking potential customers and partners is straightforward to do and should be done by a freelancer every time they work with someone, to protect themselves against late payment.”

About the research
An online survey of 1,003 freelancers and sole-traders was undertaken by TLF Research in March and April 2016.
For further information:

About Ormsby Street
CreditHQ is built by Ormsby Street, a Software-as-a-Service business based in Old Street, London. Formed in 2014 to take over the operation of the financial data proposition of BCSG, Ormsby Street is developing the next generation of financial data services for small businesses. Its team of high-performing product innovators and software engineers are quietly taking sophisticated financial information and turning it into a next-generation digital tool to help businesses make good decisions about customers, suppliers and themselves.