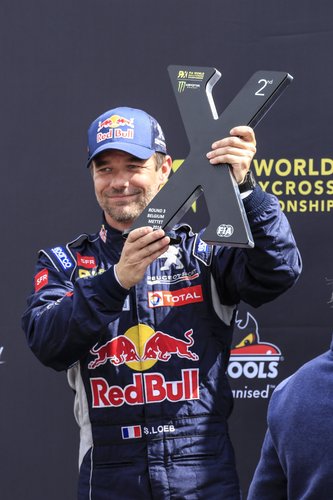 Sébastien Loeb's excellent weekend at Mettet, Belgium, concluded with the Frenchman earning Team Peugeot Hansen's first podium finish of the season at Round 3 of the 2016 FIA World Rallycross Championship.

o Sébastien Loeb provided further evidence of his all-round skills by claiming his first qualifying heat victory in the FIA World Rallycross Championship on Saturday. He was third after the heats phase before going on to secure second place both in his semi-final and in the final on Sunday afternoon.

o Team Peugeot Hansen leaves Belgium with the weekend's biggest points haul to climb to third spot in the Teams' standings, just six points short of second place. In the Drivers' standings, Sébastien Loeb is fourth, four points shy of the provisional podium, while Timmy Hansen secured fourth place in his semi-final to appear in 12th position in the championship.

o The weekend's third qualifying heat saw Davy Jeanney hurt his shoulder, a reoccurrence of the injury he sustained last season in Argentina. He still succeeded in lining up for the fourth heat, however, and he qualified for the semi-final stage when he was hit by another car through the opening turn.

o Mettet was also hosting the opening round of this year's European Rallycross Championship. Seventeen-year old Kevin Hansen celebrated his debut in the best fashion possible by winning the final in his Peugeot Hansen Academy PEUGEOT 208 WRX.

"Globally, it was a good weekend for the team. Sébastien hit the ground running and it's a shame Timmy had a jump start in his semi-final, otherwise he would have reached the final as well. We showed that we're competitive, and Kevin's first race in the European Championship was superb. He drove intelligently and won his debut event. That's fantastic!"
Sébastien Loeb (PEUGEOT 208 WRX #9, Team Peugeot Hansen)

"It was a pretty good weekend for me. It's nice to have scored my first podium finish in rallycross and the main thing is that I was competitive throughout the event. I felt comfortable in free practice in this car at this track. I'm beginning to find my marks and I was helped by a positive draw. My starts were good and I succeeded in making the most of them, although it will still need some work before I can start chasing Ekström. He's been fast everywhere so far. At least we were in the fight here in Belgium. We now need to produce a similar performance at Lydden Hill."
Kevin Hansen (PEUGEOT 208 WRX #71, Peugeot Hansen Academy)

"I was thrilled to win the final on my European Rallycross Championship debut! My weekend didn't get off to the best of starts when I had a big smash at the start of the first qualifying heat. After that, though, I showed good speed and felt confident. I just needed to get a head start over my rivals. I managed to do that in the final and that helped me to go on and win."

o Media Guide: Peugeot Media
o Follow the team at www.peugeot-sport.com & www.hansen-motorsport.seand support us at Facebook, Twitter & Instagram !
o To book an interview with a team member in French or English, please contactstephanie.val@ext.mpsa.com. In Swedish,susann@hansen-motorsport.se.
o Copyright-free photos and videos can be downloaded from www.peugeot-media.com orwww.redbullcontentpool.com/teampeugeot-hansen