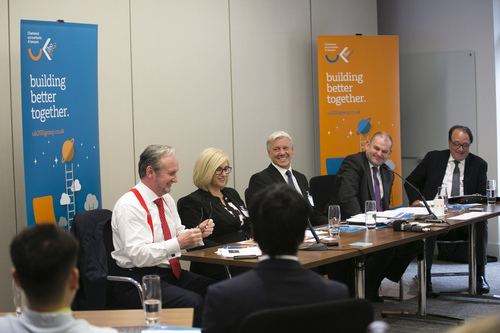 The UK200Group, established in 1986, represents a significant group of trusted, quality-assured business advisers

As part of its commitment to the small and medium-sized enterprise (SME) business community, the UK200Group has launched its Campaign for Clarity ahead of the EU Referendum on June 23.

With this in mind, the UK200Group asked its members and their clients to contribute their most important business questions to a document that was then submitted to Britain Stronger in Europe and Vote Leave. The answers were received between May 12 and 24 2016 and are documented in the report.

The UK200Group, established in 1986, represents a significant group of trusted, quality-assured business advisers – chartered accountants and lawyers – who have over 150,000 SME clients in total. As such, the UK200Group acts as the voice for 1,500 charities, over 10% of all registered academies, more than 3,700 farms, 800 healthcare businesses and over 500 property and construction professionals.

Below are the answers to the key charity and education questions. The Remain camp, as the nearest to status quo, has had its answers listed first, followed by those of the Leave camp.

The UK200Group is impartial in the EU referendum debate and seeks only to provide clarity to its members on issues that will affect them. As such, the following answers are provided verbatim from Britain Stronger in Europe and Vote Leave and are combined for the first time in this document.

1. What is your advice to charities wishing to make known their views on Brexit given the warning issued by the Charity Commission that charities should only enter these are under exceptional circumstances, and that those who do will be watched carefully by the regulator?

‘In exceptional cases, charities may consider that the outcome of a referendum is likely to affect directly, positively or negatively, the delivery of their charitable objectives.’ (p.1)
‘Political activity can only ever be undertaken in support of your charitable purposes.’ (p.1)
‘You should be able to explain why you are getting involved in the EU Referendum and how you reached your decision to do so.’ (p.2)

When making a decision, Trustees must ensure there is a written record of the decision making process. The minutes should include:

This is a decision for the UK public, and while Vote Leave welcome everyone’s contributions to the campaign, this ought to be respected, particularly by those who may have conflicts of interest through receipt of EU funding.

2. A great many charities and social enterprises receive vital funding through European Grants. What will replace this funding if the UK voted to leave?

EU funding helps charities work with partners across the continent and to foster civil society. 249 different UK charities and third sector organisations benefitted from over £217 million in funding from the EU in 2014.

The Leave campaigners are unable to guarantee that EU funding will be replicated if we leave the EU.
UK charities are is set to benefit greatly from EU funding over the next years:

• EU Structural Funding, where Britain receives £8.3bn from 2014 to 2020, is used across the country to help people into jobs, create apprenticeships, and provide skills training for workers

• EU research and development funding, where under the last funding round our universities and SMEs received £5.6bn (and the budget for the next funding round is the biggest ever), helps Britain lead the world in science and research

We pay into the EU twice as much as we get back. Every year, we give the EU nearly £20bn, over £350m every week. For 40 years we have been net contributors to the EU. Were we to leave, we would not only be able to match the EU’s current funding but would also have a large reserve of new funds to tap into, funds that could be invested in our priorities, including the NHS, but also deserving charities and social enterprises. All that happens now is that these groups get some of the UK’s money back.

3. Recent polls suggest that the overwhelming majority of individuals running charities and social enterprises will vote to stay in Europe. What would those campaigning to leave say to them to allay fears that funding to the sector will be lost?

It is anti-democratic to support a system that privileges the decisions made by unelected bureaucrats in Brussels over the decisions of elected politicians and UK voters. If UK voters consent to being taxed in order to provide the funding for these charitable and social enterprise organisations, there is no reason to fear such a loss in funding. If anything, funding in this area could well increase, after we no longer send £350 million to the EU every week.

4. Universities UK, which represents vice chancellors, has said that leaving the EU have a negative impact on the standard of higher education, would damage scientific research and damage graduate job prospects - please comment.

It’s clear that our universities are stronger in – they benefit from great opportunities through EU funding for science and research cooperation.

Over 200,000 UK students have spent time abroad on the Erasmus exchange programme. Students who have undertaken placements on the Erasmus programme are 50% less likely to experience long-term unemployment than their counterparts.
Outside of the EU, we could lose access to vital funding for UK universities and our students, which would hit us hard.

The UK is an unchallenged leader in the provision of university education in Europe, with our universities significantly outperforming those of other countries in the region. The UK has the three top universities in Europe - Oxford, Cambridge, and Imperial College London. 34 of the top 200 universities in the world are UK institutions. This is over a third of the 91 universities based within the EU in the top 200.

Given this, and that the UK is a net contributor to the EU budget, after withdrawal from the EU it could replace the funding currently provided to UK universities, or alternatively participate in such programmes (eg. ERASMUS+) without being a member of the EU. There is no prospect of staff or students who are EU nationals and currently lawfully resident in the UK being removed. Universities UK, in their 2014 annual report, noted that they had lobbied the Government to mitigate the impact of the Immigration Act 2014 on non-EU students. However, the current restrictions placed on non-EU students are only likely to be lifted if the UK has the ability to control economic migration from the EU, which will only be possible following withdrawal (Universities UK, July 2014, link).

The full 30-question report can be found here.

A video of the media briefing can be found here.

On May 11, the UK200Group hosted a debate at which 30 questions from SME owners were given to leading politicians, who discussed the implications of a Remain or Leave vote. The questions were then given to the official Remain and Leave campaigns, and the report was put together between 12 and 24 May.