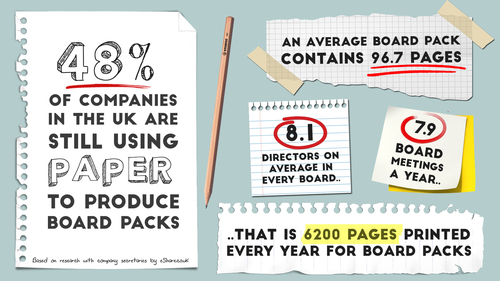 It seems archaic that in this era of digital transformation, so many organisations are still using paper to produce board packs

Research with company secretaries reveals that on average more than 6,000 pages are printed annually, purely for board meetings

26 July – Research with UK-based company secretaries has revealed an astonishing reliance on paper at board level, with around half of organisations (48%) still using paper to produce board packs for board level meetings.

The research, conducted by technology firm eShare, revealed that the average board pack contained 96.7 pages, and with the average company having 8.1 directors on the board and holding 7.9 board meetings each year, this equated to around 6,200 pages printed each year, just for board packs. Furthermore, very few organisations used an online board portal, with many relying on either email or Dropbox to share information.

“It seems archaic that in this era of digital transformation, so many organisations are still using paper to produce board packs,” said Alister Esam, CEO, eShare. “Not only are the printing and production of them a drain on resources, but paper board packs can be easily lost, are inefficient and do not make for transparency and good governance at board level. Even email is only slightly preferable to paper, so with many areas of business now fully digital, why do many board meeting processes remain firmly in the 20th century?”

After a number of high-profile governance issues at a board level in recent times, maintaining high standards of governance is higher up the corporate agenda than ever before. Data breaches are also on the rise, which makes it more surprising that organisations continue to produce paper board packs, according to eShare CEO Alister Esam:

“Governance should be the number one priority for organisations in 2016. People expect businesses to be open and transparent in their operations and in what goes on at board level, and they expect individuals and companies to be accountable should that not be the case and should wrong-doing emerge. This is even more true in the turbulent post-referendum economic and politic climate. With organisations potentially looking at relocating and making major decisions about their future, board level transparency is even more important.”

The printing and production of board packs is also a drain on internal resources, with the research revealing that the average board pack takes 9.5 hours to prepare. 26% of company secretaries surveyed say that board members often request them to change documents after they have been distributed, meaning additional work and printing costs.

“The exact printing cost of a board pack is dependent on a number of variable factors, but it is clear that the printing and production of more than 6,000 pages just for board packs, is an unnecessary and prohibitive expense,” continued Alister Esam. “It’s also a highly inefficient way of disseminating information. Using digital board packs means it is much easier to keep content secure and private and also means that board members have all the information they need - before, during and after a meeting – and can access that information via their tablet or smartphone.”

eShare conducted research with 50 company secretaries during May and June 2016.