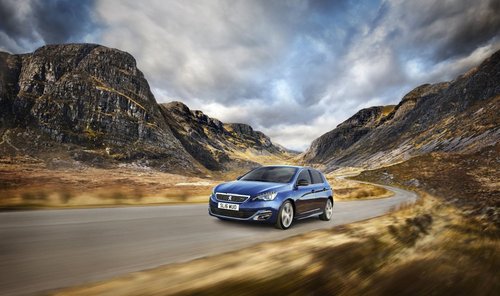 The centre-piece of this campaign was a new TV commercial, produced specifically for the UK market, which challenges buyers to consider the new 308

Peugeot UK is in a confident mood following the Auto Express New Car Awards 2016, where it won the ‘Best Advertising Campaign Award’ with its ‘Confidence. Built In’ initiative.

The combined TV / Radio / Press / Outdoor / Social Media / Digital campaign was created by Peugeot UK to promote the confidence experienced by its customers. Promoted under a core ‘Built In’ message, the campaign encouraged potential customers to take a ‘closer look’, as Peugeot has confidence in its products that make them more than worthy of scrutiny.

The centre-piece of this campaign was a new TV commercial, produced specifically for the UK market, which challenges buyers to consider the new 308 and Peugeot as a brand. Filmed in Glencoe and Glasgow, the advert was produced by the UK team, to specifically address local requirements for customers buying a 308 and has been on-air since May.

Mark Pickles, Marketing director at Peugeot UK, commented “This is fantastic news. Everyone at Peugeot knew that the 308 is a product absolutely worthy of serious consideration – due to its many attributes; high build quality, competitive specification and superb driving credentials. The advert was designed to challenge the view for customers to want to find out for themselves. We took pleasure formulating this UK campaign, confident in the excellence of our products and the detail contained within, so to receive this accolade at the Auto Express New Car Awards vindicates all our hard work and for the 308 that continues to reap success, having won the prestigious European Car of the Year award in 2014.”

Steve Fowler, Editor-in-Chief at Auto Express, said “The Peugeot 308: ‘Confidence. Built In’ campaign has impressed us all - our readers like it enough to name it one of the best three car adverts of the past year and our panel of experts agreed, naming it the very best of those put into the final by our readers. Not only is it a stylish, watchable ad, it cleverly works across different media and gets the message across superbly.”
In order to lend gravitas to the film, which took a very direct approach to questioning how people choose their next car, Peugeot used the recognisable and highly acclaimed actor – Peter Mullan.

The campaign also saw the launch of Peugeot UK’s new creative format, where a new visual layout and tone of voice were employed, together with the line “Confidence. Built In”. Future campaigns will also feature the “Built In” tagline, in order to provide a consistent means of putting across the strengths of each vehicle, in a consistent and coherent manner.

Accompanying Outdoor, Digital, Radio and Press campaigns Peugeot challenged prospective buyers to share the confidence it has for the 308 by taking a closer look with a 48 Hour Test Drive, giving customers the opportunity to drive and become more acquainted with the 308s numerous attributes, and to see for themselves why it is a compelling car to drive.

The UK campaign promoted the award-winning Peugeot 308 in GT Line specification – launched in 2015, which currently accounts for a fifth of the range take-up. The 308 is a car with many attributes; being the lowest CO2 car in its sector, thus with the latest and best-in-class, award-winning engines it is also the most economical, while other performance models feature the most-powerful engine of its size too, in a body design that is lightest and class-leading in capability and size. The brand uniquely features the innovative Peugeot i-Cockpit, well-liked by its 2.2-million customers, for it combines agile handling response with a compact steering wheel, high-positioned instrumentation and a colour touchscreen – all within the view looking forward. Its standard specification is comprehensive and provides allure for its many advanced features and rewarding driving experience.

The overall vision for the ‘Confidence. Built In.’ campaign, which spanned all major communication channels, was to challenge prospective buyers on how they choose their next car. By highlighting the key product attributes of 308, Peugeot demonstrated that the beauty of the 308 was also in the detail. With stunning driving footage and new photography it demonstrated that the Peugeot 308 is a car which marries image with detail. The campaign first ran from May until the end of June, and will now be reprised later in the autumn to maximise awareness following the success with this ‘Best Advertising Campaign Award’.

PEUGEOT
Since 1810 Peugeot has been producing durable products of excellence, since 1858 all are branded with the Lion logo – chosen to demonstrate strength, suppleness and swiftness to personify the durability of its products. As one of the earliest automotive producers, the Peugeot brand can trace its roots back to 1889 when it began producing automobiles and since then over 65 million vehicles have been produced, advancing technology with style and efficiency to enhance the customer experience. Demonstrated through its Brand signature ‘Motion & Emotion’, Peugeot is present in 160 countries, has 10,000 franchised Dealerships and is recognised the world over for the quality and design excellence of its products.

PEUGEOT UK
The UK is the third largest market for Peugeot with its UK Headquarters located in Coventry. The UK car line-up includes the 108, 208, 308, 508, 2008, 3008 and 5008 supplemented by people-carriers and a four-model van range that includes the Bipper, Partner, Expert and Boxer.

308
Launched in 2013, the 308 was 2014 European ‘Car of the Year’. Joined by the SW estate in 2014, is powered by accomplished BlueHDi diesel and PureTech 3-cylinder petrol engines. Sportier GT Line, GT and GTi models were introduced in 2015 greatly enhancing the desire for this class-leading and capable vehicle.