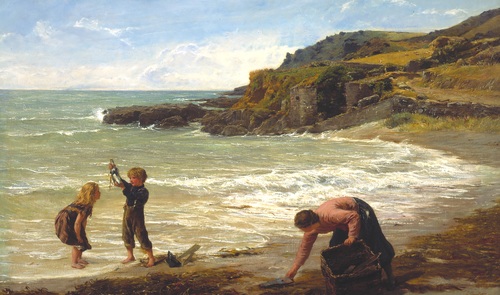 The 150th anniversary of the first communications cable laid across the Atlantic Ocean, connecting Europe with America will be celebrated in a new and free exhibition entitled ‘Victorians Decoded: Art and Telegraphy’ at the City of London Corporation’s Guildhall Art Gallery, from 20th September 2016 to 22nd January 2017.

This exciting collaboration between Guildhall Art Gallery, King’s College London, The Courtauld Institute of Art and the Institute of Making at University College London will explore how cable telegraphy transformed people’s understanding of time, space and speed of communication. Never-before-seen paintings from the City Corporation’s art gallery and work by prominent Victorian artists will be on display as well as rare artefacts such as code books, communication devices, samples of transatlantic telegraph cables and ‘The Great Grammatizor’, a specially-designed messaging machine that will enable the public to create a coded message of their own.

Paintings by Edward John Poynter, Edwin Landseer, James Clarke Hook, William Logsdail, William Lionel Wyllie and James Tissot will be displayed, all of whom registered a changing world. Four themed rooms; Distance, Resistance, Transmission and Coding will tell the story of laying the heavy cables which weighed more than one imperial ton per kilometre across the Atlantic Ocean floor, from Valentia Island in Ireland to Newfoundland in Canada.

A new future
It took nine years, four attempts and the world's (then) largest ship, the Great Eastern, to complete.
The cable enabled same-day messaging across the continents for the first time and sparked new opportunities as businesses were suddenly able to respond to world markets with breath-taking speed. Governments and military forces were the first to use it. The first 'official' transatlantic telegraph was from Queen Victoria to President James Buchanan.

‘The Great Grammatizor’
Central to the exhibition will be an interactive messaging machine that will produce personal 'coded' poems for the public to enjoy. Three rotating buttons represent 'genre', 'feelings' and 'driving force' and when each is turned to one of seven options and a lever 'cranked' it will produce a one-of-a-kind text for visitors to decipher. Imagined by UCL PhD student Alexandra Bridarolli, it was inspired by 'The Great Automatic Grammatizator' a story by Roald Dahl from his collection Someone Like You (1953).

Distance
The long-distance cable completely revolutionised communications; rather than weeks by ship, messages took minutes (approximately one minute for eight words) to transmit. The cables challenged ideas of space and time and completely transformed the way the Victorians did business and thought about communications. This room features samples of transatlantic cables, William Ayerst Ingram’s ‘Evening’ (1898) and William Lionel Wyllie's ‘Commerce and Sea Power’ (1898).

Resistance
The resistance in the 2,754 km of copper cables was huge and engineers barely understood it, making the passing of signals very difficult. Damage from vessels and the elements also hindered transmission. Edwin Landseer’s ‘Man Proposes, God Disposes’ (1864), will take pride of place and depicts a British shipwreck and scavenging polar bears. Two never-before-seen paintings will be on display, Thomas Hope McLachan’s ‘The Isles of the Sea’ (1894) and Peter Graham's ‘Ribbed and Paled by Rocks Unscalable and Roaring Waters’ (1885).

Transmission
The telegraph companies desired speed but the line needed to clear between signals. To speed things up smaller signals were sent requiring ever more sensitive detectors. Paintings including James Clarke Hook’s ‘Caught By the Tide’ (1869) and William Logsdail ‘The Ninth of November, 1888’ (1890) explore old and new ways of transmitting messages.

Coding
To shorten messages and hide secret content from telegraph clerks people used code books and ciphers. Transatlantic code books will be on display alongside paintings that reflect the concept of coding through human interaction. These include James Tissot’s ‘The Last Evening’ (1873) and Solomon Joseph Solomon's ‘A Conversation Piece’ (1884).

Vicky Carroll, Head of the City of London Corporation’s Guildhall Art Gallery, said:
‘Thousands of miles of cable laid beneath the ocean sped up communication in a way that few people – not least, artists - could have ever imagined, forcing them to re-evaluate distance and time. There is no doubt that telegraphy transformed people’s lives, and ‘Victorians Decoded’ will aim to convey their sense of excitement and wonder by using art works drawn from significant collections.’

Clare Pettitt, Professor of Nineteenth-Century Literature and Culture at King’s College London said:
‘The transatlantic telegraph changed the world in the nineteenth century and this exhibition marks the 150th anniversary of this momentous occasion. Much of the research on display has resulted from work by King’s researchers on the Scrambled Messages project which goes beyond the obvious in exploring how the telegraph entered the public imagination.

We have examined how popular understandings of the transatlantic submarine telegraph fed the Victorian imagination and made certain themes, metaphors and paradigms urgent and relevant for artists, writers, scientists and other cultural producers.’

Caroline Arscott, Professor of Nineteenth-Century British Art at The Courtauld Institute of Art said:
‘The exhibition shows that art itself was transformed as telegraphic systems were established. It reveals the surprising ways in which Victorian technology shaped culture. This is a vivid instance of the interweaving of art and science, a topic that can be explored in many different periods of art making.’

• Guildhall Art Gallery was established in 1886 as 'a Collection of Art Treasures worthy of the capital city'.
• See works dating from 1670 to the present, including seventeenth century portraits, Pre-Raphaelite masterpieces and a fascinating range of paintings documenting London's dramatic history.
• General admission to Guildhall Art Gallery is FREE; however, an entrance fee may be charged for some exhibitions, with concessionary rates for senior citizens, registered unemployed and registered disabled.
• Opening times: 10am - 5pm (Monday – Saturday), 12pm - 4pm (Sunday)

About the Courtauld Institute of Art

• Based at Somerset House, The Courtauld Institute of Art is an independent college of the University of London and is one of the world’s leading centres for the study of art history, conservation and curatorship, and its Gallery houses one of Britain’s finest and best-loved collections.
• Facilities for students are exceptional, including the outstanding collection of paintings, drawings and prints, sculpture and decorative arts.
• Courtauld staff supervise research from classical antiquity to the present, and the Research Forum offers access to visiting speakers from around the world. Public lectures, short courses and lunchtime talks allow members of the public to share in the wealth of expertise at The Courtauld.
• The Guardian ranked The Courtauld first for the study of art history in its 2017 University League Table. See www.courtauld.ac.uk for more details.

About King’s College London
• King's College London is one of the top 20 universities in the world (2015/16 QS World University Rankings) and among the oldest in England. King's has more than 27,600 students from some 150 countries worldwide, and some 6,800 staff.
• King's has an outstanding reputation for world-class teaching and cutting-edge research. In the 2014 Research Excellence Framework (REF) King’s was ranked 6th nationally in the ‘power’ ranking, which takes into account both the quality and quantity of research activity, and 7th for quality according to the Times Higher Education rankings. Eighty-four per cent of research at King’s was deemed ‘world-leading’ or ‘internationally excellent’ (3* and 4*). The university is in the top seven UK universities for research earnings and has an overall annual income of more than £684 million.See www.kcl.ac.uk/newsevents/About-Kings.aspx for more details.