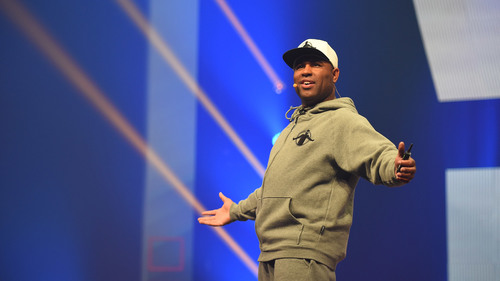 I defy anyone to hear him talk and not be immediately uplifted by his amazing vision and ultra-high energy.

Tough-talking, critically acclaimed US-based ‘hip hop preacher’ Dr Eric Thomas will be presenting his Multi-Millionaire Masterclass at a special one-day event on Saturday September 24 in London. He has been invited by author and motivational speaker Dr Ava Eagle Brown to headline the 2016 Urban Life Event.

Dr Eric Thomas had a challenging early life. Born to a teenage mum in Chicago, Illinois, Eric dropped out of school at 16 and found himself homeless, living in deserted buildings and eating from dustbins. Thanks to a chance meeting with a pastor, he reversed his fortune.

Dr Eric Thomas secured a job at an Olive Garden on the west side of Detroit, where he met his wife, before moving to Huntsville, Alabama. He spent 12 years working towards an undergraduate degree at Oakwood University and graduated in 2001. It was during his time at Oakwood he started a programme to help underprivileged youths change their lives. He went on to achieve a master’s degree from Michigan State University in 2005 and a PHD in education in 2015.

Today Dr Eric Thomas coaches America’s top sporting teams, for leagues including the NBA and the NFL and is a world-renowned speaker, author, educator and minister. He has also written two books, ‘The Secret to Success’ (2012) and ‘Greatness Is Upon You: Laying the Foundation’ (2014).
His success has continued online where his YouTube channel has accumulated over half a million subscribers and his motivational videos have achieved in excess of 50 million views. Today Dr Eric Thomas tours the world, helping people realise their full potential and control their futures.

Speaking in advance of the event from his office in Detroit, Michigan, Eric Thomas said, “I promise you, if you come to this event, you will re-write your history and make the rest of your life the best of your life.”

Dr Eric Thomas focuses on the importance of mind-set and says, “When you want to succeed as bad as you want to breathe, you’ll be successful.”

Dr Ava Eagle Brown spent her early life living in rural Jamaica and experienced a harrowing childhood where she faced abuse and harsh ordeals. As a young adult she was held at gunpoint which led to her escape from Jamaica to protect her mental health.

Today she is an internationally renowned speaker and transformational coach helping other people change their lives. The mother of two is also a celebrated author and her book “The Mango Girl” is in process of being made into a film.

Dr Ava Eagle Brown said, “Perhaps because like Eric, there was no biological father figure in my life, and because I too have turned my life around, I identify with him strongly. He’s phenomenally motivating and helped me change my outlook for the better. I defy anyone to hear him talk and not be immediately uplifted by his amazing vision and ultra-high energy.”

Crucially, he pulls no punches in his highly energised speeches. He accepts no excuses and believes that success is down to taking responsibility for oneself and not blaming others. He says, “Winners win and losers lose. It’s as simple as that.”

Dr Ava Eagle Brown said, “Together with my business partner, Sonia Polean, we are hosting a one-day event in London that appeals to hardworking parents and their teenage children alike. It took Eric 12 years to gain a PHD, so he is well qualified to teach young people the importance of a good education. The Multi-Millionaire Masterclass will also appeal to entrepreneurs wanting to improve on their achievements.

“Dr Thomas will reveal his secrets to financial and psychological success, including how to avoid a dead-end job, how to create a “winning” mindset and how to make six figures. He is astonishing and attendees’ horizons will be expanded as soon as they listen to his hard-hitting truths.”

Eric Thomas, PhD is a critically acclaimed author, world-renowned speaker, educator, pastor and audible.com Audie Awards Finalist. ET, as he is affectionately known, has taken the world by storm, with his unique, creative style and high-energy messages. His messages continue to impact tens of millions of people in several hundred countries. Through a significant social media presence and his international tours, “ET, The Hip Hop Preacher” has rapidly become a global phenomenon.

Drawing from his personal experiences as they relate to homelessness, the absence of his biological father, scholastic struggles, and various other obstacles, ET allows his life to be an “open book” from which radiates dynamic and inspiring messages that relate to many people across all strata.

While the typical undergraduate student takes between four to six years to complete their studies, ET took 12. For most, that would have signalled the end of any future academic aspirations. For ET, it was a springboard from which his academic success would be launched. In 2005, he completed and received a Master’s Degree from Michigan State University and in 2015, Eric successfully defended his dissertation and received his PhD in Education Administration on May 8th, 2015, from Michigan State University.

Dr Thomas’ commitment to community activism has been long standing. It began with his award-nominated GED Program that lead to his non-profit, Break The Cycle, I Dare you, and a plethora of ministerial and educational endeavours. The culmination of those efforts resulted in the development of the Advantage program at Michigan State University. This program targets high risk college students by improving their study habits and increasing their retention rates. Michigan State University is where he continued to pursue his passion to remedy the effects of adverse societal influences plaguing both the young and old. It is from this platform that he created International Urban Education Consultants; a non-profit organization committed to finding solutions to close the achievement gap in urban schools through goal-framing and helping students to reform their perception of learning.

ET is the epitome of hustle, drive, determination, and success. Millions of followers have been able to apply the principles revealed in his award nominated autobiography, The Secret to Success, which has scaled the social media charts with over 50 million hits. His second release, Greatness Is Upon You, features 24 life-changing fundamental precepts and is meeting with equal success. Both titles are available through Eric Thomas and Associates Publications and can be purchased online at etinspires.com.

As CEO of his consulting Firm, ETA LLC, Eric has led his team through the doors of dozens of reputable organisations and Fortune 500 companies such as General Electric, Quicken Loans, AT&T, Nike, Under Armour, New Balance and UPS. He has also consulted for major universities and the major sports teams within the MLB, NBA, NFL and MLS.

Eric’s spiritual walk, tenacity and drive are the perfect examples of his quotes, “When you want to succeed as bad as you want to breathe, then you‘ll be successful.” At a recent business meeting, Eric had the opportunity to learn more ‘Secrets of Success’ from Warren Buffett. This invitation-only event broadened his mind and further strengthened his resolve to empower others in their pursuit of greatness.


About Dr Ava Eagle Brown:
Dr Ava Eagle Brown was unable to enjoy formal education as she spent much of her childhood searching for money and food to provide her family’s next meal. She was determined to change her life and succeeded in achieving a Bachelor in Business Administration and a Diploma in Secondary Education from the University of the West Indies at Mona, Jamaica.

She has since achieved two Master of Business Administration degrees (MBAs) at both the Newport University in California and the University of Wales (2014).