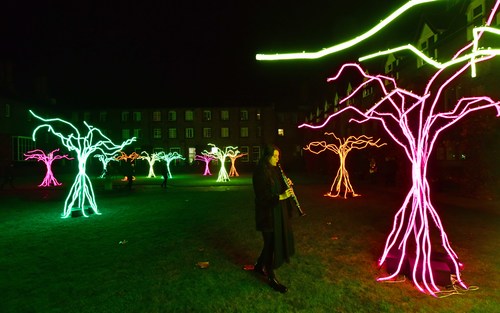 Transforming aspects of the city through the use of light – that’s the promise from organisers of the eleventh illuminating York, supported by Arts Council England, which returns to the city tomorrow (Wednesday 26 October) to Saturday 29 October 2016. This year’s event features seven newly commissioned artworks using light, an expanded light trail and a host of ‘fringe’ events to create evenings to remember across York’s historic streets.

This year’s festival will see new venues host specially commissioned artworks, with outdoor installations highlighting some of York’s most intriguing buildings and spaces, and indoor illumination using projection, colour and light to showcase very different aspects of York’s heritage, from the industrial past of National Railway Museum’s workshops to the interior of Holy Trinity Church in Goodramgate. Internationally-renowned artists such as Jason Bruges Studio, Heinrich and Palmer, Helen Maurer and Studio PSK will contribute new artworks to this year’s event.

“This year’s illuminating York has been developed to take visitors on an exploration of the city after dark, with key venues hosting our newly commissioned artworks, three architectural lighting schemes around the city in partnership with the Society of Light and Lighting, and illuminated bunnies in 50 shop and business windows throughout the city centre in our own trail,” comments one of illuminating York’s curators, Hazel Colquhoun. “We’re being joined in the ‘fringe events’ this year by other venues opening late on specific nights with illumination-themed events and activities, from Fairfax House and The Bar Convent Living Heritage Centre to night time opening of the City Walls so that people can return for two or more nights for a different illuminating York experience.”


Nine key highlights in this year’s illuminating York will be:

After a triumph lighting The Shard in London on New Year’s Eve, Jason Bruges Studio will become ‘light masons’ within the cavernous nave of York’s gothic cathedral. Using only white light and particulate suspended in the air, visitors will experience spectacular choreographed spaces carved out of light. This is the only paid-for commission, with standard admission prices of £8 for adults and £3.50 for children, which also includes admission to the East End exhibition and Chapter House. Each ticket is allocated a time slot and family ticket deals are available. Tickets are available from York Theatre Royal box office. Family tickets are also available.

A new venue for illuminating York, the historic quad at York St John’s Lord Mayor’s Walk campus will be occupied by a forest of light. Visitors can walk amongst skeletal coloured luminescent trees, to experience the unusual light and shade cast by their glowing branches, with further exhibitions and performances by York St John Students to discover around the campus. Free.

Pioneers of large-scale illuminated art, Heinrich and Palmer turn their attention to the Workshop at NRM, creating an experience that brings together projection, light drawings, film and sound in the working heart of the museum, where engines are maintained and restored. Visitors will also see the return of Locos in a Different Light, at the NRM, where the halls and locomotives are transformed with colour and light by theatre lighting design students. Free.

Secrets in the stained glass inspire the displays inside this historic building as Helen Maurer creates a compelling installation using light, glass and mirrors to project shape and colour onto the walls and ceiling. Free.

Regularly voted one of Britain’s most picturesque streets, Studio PSK has designed ‘Orbit’ which will be installed along the entire length of the world-famous Shambles. Arcs of light will revolve above the heads of the visitors encircling views of the iconic street, prompting them to look up from the historic street. Free.

“Loopy Lou” presents a skipping figure, whose movements are created by just a few LED lights. In daylight, Brun’s sculpture looks like an abstract wire construction, but after dark, the LED lights that dance around create a depiction of a skipping girl, based on the artist’s daughter playing. Remi Brun lives and works in Paris and this is the first time his work has been shown in a UK light festival. Free.

The Society of Light & Lighting– the top industry body for those working in the lighting sector – will be working with schools around York to create lighting schemes for city venues, including St Leonard’s Hospital, Multangular Tower, Exhibition Square and St Michael-le-Belfry. Free.

Making a return after its debut last year will be the popular Bunny Light Trail, in collaboration with York contemporary design store Snow Home, where 50 bunny lights customised by artists and creatives will be placed in shop and business windows across the city centre.

Adding to the main programme will be a packed festival Fringe programme with venues across the city taking part, from candlelit tours of Fairfax House to Gregorian Latin Chant with ‘Illuminations by Visions of York’ in All Saints North Street Church.

Kate McMullen, Head of Tourism, Make It York, said, “illuminating York is unlike any other light festival. What’s unique about York’s festival is that the artists have spent time in the city and the different venues to create artworks that are designed specifically around these individual and historic York locations.”

“Exhibits from previous years have gone on to win awards when they are displayed in other venues around the world, so this is a chance to see the premier of these stunning works in the location that inspired their creation. illuminating York is one of the reasons York was able to secure the coveted UNESCO City of Media Arts status – and other cities turn to York for inspiration.”

For the first time this year, international street food will be available to offer on-the-go sustenance for visitors each evening in Shambles Food Court.

• The festival gains over 50,000 ‘visits’ every year
• Over the past ten years the festival has commissioned over fifty artworks for the city
• illuminating York is a member of ‘Light Up the North’, a network of seven light festivals taking place in cities across the North of England www.lightupthenorth.com
• illuminating York was named by The Guardian in its top ten European Lighting Festivals
• In 2015 the illuminating York Festival was nominated for a Dulux Colour Award
• illuminating York is managed by Make It York on behalf of a city-wide steering group, chaired by Liz Page, Historic Properties Director (North) - English Heritage
• The principal funder of the festival is Arts Council England, with additional funding from ticketing and private sponsors
• illuminating York is organised by Make It York supported by Arts Council England. This year’s partners include English Heritage, National Railway Museum, The Society of Lighting and Light, York Minster and York St John University.

Make It York (York’s Destination Organisation) – Make It York’s purpose is to develop and promote the city and its surroundings – nationally and internationally - as a vibrant and attractive place to live, visit, study, work and do business.

Visit York is a part of Make It York and is the leisure tourism brand
Under the brand Visit York, Make It York’s aim is to market York as a must-see world-class destination to the leisure visitor and ensure investment to develop the quality of tourism in York.

Photographs from the media preview will be available for download from:
http://news.cision.com/illuminating-york-2016