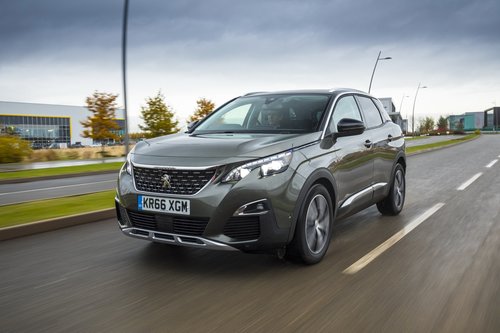 The all-new Peugeot 3008 SUV has been announced as the Carbuyer ‘Car of the Year 2017’, also winning the highly sought after ‘Best SUV 2017’

The all-new Peugeot 3008 SUV has been announced as the Carbuyer ‘Car of the Year 2017’, also winning the highly sought after ‘Best SUV 2017’ and ‘Best Medium SUV’ categories too.

The eagerly awaited all-new 3008 SUV is an important development in the SUV C segment market and arrives at a time when customers are more than ever expecting differentiation and new experiences. Equipped with its revolutionary, latest generation Peugeot i-Cockpit®, elegant styling, and high-tech equipment, the 3008 SUV aims to establish itself immediately as a key player and this Carbuyer award clearly recognises the competitive features over its competitors.

Carbuyer.co.uk is the online site for trusted reviews, owner opinions and expert advice on all motoring matters. It has recently launched a reference print magazine highlighting the best cars currently on sale.

Stuart Milne, Editor at Carbuyer, commented: “Forget everything you thought you knew about the previous 3008, because Peugeot has rung the changes. First off, the 3008 is now a fully-fledged SUV rather than the crossover of old. It’s handsome from the outside, but inside is where the game has really moved on. The dashboard is beautifully designed and features extensive use of fabric on the dashboard and door panels to lend a chic feeling. The clever i-Cockpit® dashboard is a 12.3-inch screen that displays your speed, navigation, phone and audio information and is fitted as standard to every 3008 SUV in the range.

“The 3008 SUV is ahead of the pack when it comes to more pragmatic matters, too. It has a big boot and plenty of interior space. There’s a wide range of efficient petrol and diesel engines, and the availability of Peugeot’s ‘Grip Control’ system means the front-wheel-drive car can offer the grip of a four-wheel drive when needed. In an SUV market dominated by some exceptionally able cars, it takes something special to be the best. And that’s why we’ve named the Peugeot 3008 SUV Carbuyer’s ‘Car of the Year for 2017’.

David Peel, Managing Director at Peugeot UK, commented “This is fantastic news. The all-new Peugeot 3008 SUV has so many appealing features and for it to receive this Carbuyer ‘Car of the Year 2017’ accolade, ahead of its arrival in the UK is perfect. It sets the tone that we have a winner on our hands and I have no doubt our customers are going to love driving it too.”

The Best Car features on Carbuyer.co.uk and the awards that underpin them have been ranked by Carbuyer’s team of motoring experts. Its team has dozens of years of experience and have tested thousands of cars. Reviews are constantly updated to reflect the ever-changing automotive landscape, with more than 500 cars tested a year. Carbuyer reviews are written with the real buyer in mind, taking into account how easy each car is to live with and how it compares with its closest competitors. Carbuyer is one of the most respected car review websites in the UK.


For information and imagery on the all-new Peugeot 3008 SUV, go to www.peugeotpress.co.uk.