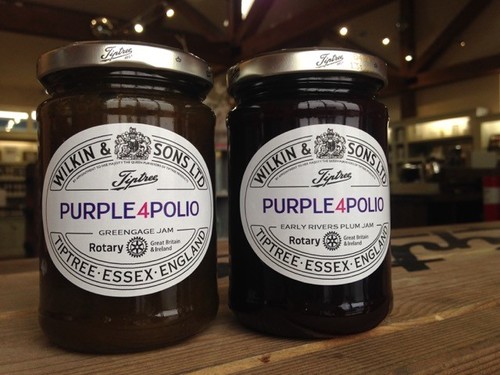 To support the tea parties and Rotary’s campaign to end polio forever, Typhoo Tea
Tea, the second largest tea manufacturer in the UK is organising a tea-tasting at the launch, and donating tea and branded disposable mugs.

Wilkin & Sons Ltd. (Tiptree Jam) has given 52,000 specially branded jars of plum and greengage Purple4Polio jam to Rotarians across Britain and Ireland. They will be encouraged to use the jam to raise awareness of the Purple4Polio campaign and to fill the empty jars with coins. The aim is to raise up to £1 million, and with matching funding through Rotary, this £1 million will become £3 million.

Social Media Information
Rotary Great Britain and Ireland will be posting about the “IWD Purple4Polio Tea Parties” from:
Twitter.com/RotaryGBI using #Purple4Polio and #IWD2017
And fropm facebook.com/RotaryinGBI